Zoo-Wee Mama! is a comic that appears in Diary of a Wimpy Kid. Originally an idea of Greg, Rowley continues drawing the comic after Greg abandons the project. It later gets published in the school newspaper when Greg resigns as the paper's cartoonist. Rowley is then made famous among the students. Greg gets jealous about Rowley getting all the fame and credit of the comic they worked on together, Greg says that Rowley should've given him half credit. Later on, Rowley then decided to quit Zoo-Wee Mama! because he wanted more time to play with his Dinoblazer Action Figure collection. 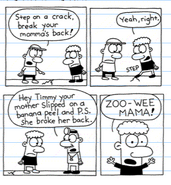 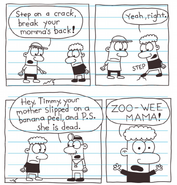 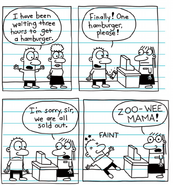 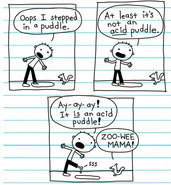 Retrieved from "https://diary-of-a-wimpy-kid.fandom.com/wiki/Zoo-Wee_Mama!?oldid=139905"
Community content is available under CC-BY-SA unless otherwise noted.