Xtreme Sk8ters is a comic about skateboarders that appears in Diary of a Wimpy Kid and The Wimpy Kid Do-It-Yourself Book.

Xtreme Sk8ters stars stick figures on skateboards and always involves one doing a dangerous skating trick. The stick figure in question always gets seriously injured and finishes with a punchline. The comic contains a number of spelling mistakes and its creator is unknown.

When Greg Heffley turns in his comics, he notes the strip in the pile of comics from other kids who are trying out for the job. He says that he isn't too worried, as most of the comics are pretty bad. 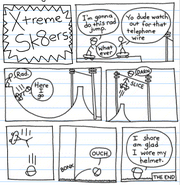 Second comic
Add a photo to this gallery

Retrieved from "https://diary-of-a-wimpy-kid.fandom.com/wiki/Xtreme_Sk8ters?oldid=142256"
Community content is available under CC-BY-SA unless otherwise noted.