Wimpy Wonderland is an island on Poptropica. It is Poptropica's 18th island, and it was released in 2011.

Another Diary of a Wimpy Kid island named Wimpy Boardwalk was released in 2012.

"The kids in town are enjoying a snow day - all except for Greg Heffley, whose little brother Manny has gone missing! It's up to you to find Manny, but before you do, you'll have to contend with surly teenagers, crabby senior citizens, and those rotten Whirley Street Kids. Join Greg, Rowley, Rodrick, and the rest of the Wimpy Kid characters for a snow-capped adventure you'll never forget!"

You'll start the island on Main Street, next to Greg. Greg will explain that Manny has gone missing, and he'll suggest that you start looking at their house for clues. Go left to Surrey Street. In Greg's house, you'll be able to collect the address book and a page from Greg's journal. When you enter Manny's room, you'll see that the window and the drawers are open. Leave through the window and talk to Rowley, who says that someone stole his Rumble Bike. Then, Manny will ride down the hill on Rowley's rumble bike! Chase him to Main Street and up a tree, and he'll end up destroying a kid's snowman. Take the carrot that's left behind.

Continue right, and you'll see Manny enter Westmore Middle School through a high window. You can't enter the school through the front door, as it's closed due to snow, so you'll need to get up there! Climb up the tree to the right, and you'll pick up a scrap of paper with three numbers on it: 9, 37, 15. You'll need these numbers for later! Push the trash can onto the left end of the see-saw, then climb back up the tree and jump on the right edge. If you did it right, the trash can will be launched upwards and land on the school. Push it to the left window, jump on it, then enter the window.

Inside the school, you'll find that Manny has run away. Now try to find Greg's locker; it's five spaces to the right of the one with the broken lock, and it's solid white. The locker combination is the same thing written on the scrap of paper: 9, 37, 15. Once you've unlocked Greg's locker, you'll get the Twisted Wizard game guide.

Go right to Leisure Towers. Climb up the building until you reach apartment 33C, which is where Greg's Grandpa lives. He has seen Manny, and he'll tell you after lunch. You'll have to play a minigame where you must stomach Watercress Salad for as long as Grandpa keeps talking, which is done by constantly clicking your mouse. This minigame is rather difficult, so try to click with two fingers as fast as you can. Grandpa will then show you the Leisure Towers security camera, which shows Manny riding a scooter in front of the building. You can't leap out the window again, so take the elevator down to the lobby, then go right to Whirley Street.

The Whirley Street Kids will constantly throw snowballs at you. You won't be able to get very far, so just grab the snow shovel and go back to Surrey Street. Go back to Greg, and he's just playing Twisted Wizard. He says that he'll help you look for Manny again, but he wants to beat a level in the game. Read the game guide, and it'll tell you how to set the game to easy mode. Twisted Wizard is simple; build your walls, then click the ogres to zap them. You'll have three rounds to beat before you win.

Once you win, Greg will ask you to return Twisted Wizard to Rowley. Rowley can't go outside, and needs you to come in. Jump on the car out front, then hide in the bush. When Rowley's dad comes out, run inside the house. Give Twisted Wizard to Rowley, and he'll give you a Joshie Fan Club Membership Card as a thank-you gift. Go back to Greg's house, and go to the left side of the bottom floor. Use the card Rowley gave you to open the jammed door. This room contains a power box, so turn off the power in Rodrick's room and he'll leave the house and drive off. In his room, you'll find Sweetie's dish, so pick it up. Since Rodrick's van is no longer blocking the garage, you can go in there and get a leaf blower. Go to the "snowman" whose eyes follow you and use the leaf blower to blow away the snow. It's Fregley! He'll give you a bingo troll.

Go even farther to the left and you'll reach Gramma's house. She'll look for him if you shovel her driveway, so use the snow shovel you got from Whirley Street to play another minigame. She agrees to look for him... after a game of bingo at Leisure Towers. Go back to Leisure Towers, and you can play as Gramma's guest. You need a blotter, so make sure you have Fregley's bingo troll. When you win, you'll get a CD of classical music as a reward.

Go to the Fast Mart on Main Street. There are a bunch of teens hanging around outside. Enter the store and insert the classical music CD, then turn the volume to the max. The teens will leave, and the store owner will thank you and give you wiper fluid. Go back to the school and talk to the snowplow driver. His windshield wipers are frozen, so give him the anti-freeze. You'll have to play a minigame where you pour it and get it to exactly four liters. The snowplow driver then decides to go and get some coffee, and you'll wonder where Greg went.

At his house, Greg is too busy "concentrating" on his game to talk to you. Open the curtains, then he'll tell you that Manny was probably looking for Tingy, and wherever Tingy is, Manny must be. Leave the house, and you'll see Manny driving the snowplow! He stops in front of the laundromat, where he finds Tingy.

Manny has finally been found. However, as you and Greg are about to walk home, the Whirley Street Kids come back and start throwing snowballs! After you help Greg roll a snowball at them, you'll get to play a sledding minigame. There's no way to lose this minigame, and you'll always make it home. You'll get to Greg's house just as Susan comes back. Greg then thanks you for getting him out of trouble and gives you the island's medallion. 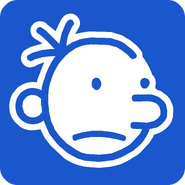 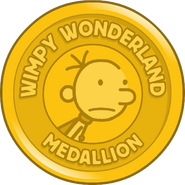 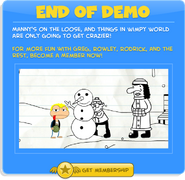 The island's banner. Note that it refers to the island as "Wimpy Island" and uses the icon for Shrink Ray Island.
Add a photo to this gallery

Characters who do not have an official name will be italicized and referred to by their internal name. 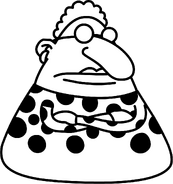 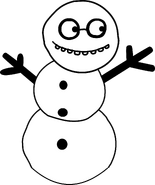 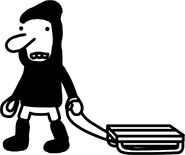 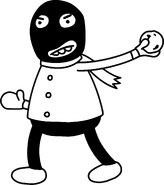 TruckDriver
Add a photo to this gallery

The promotional sneak peak.
Add a photo to this gallery 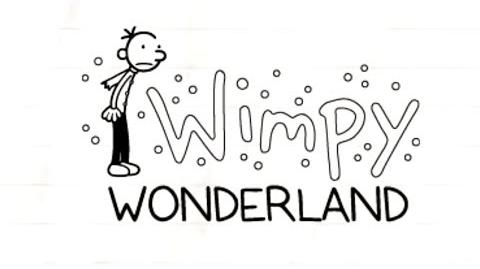 Retrieved from "https://diary-of-a-wimpy-kid.fandom.com/wiki/Wimpy_Wonderland?oldid=165253"
Community content is available under CC-BY-SA unless otherwise noted.