Wimpy Boardwalk is an island on Poptropica. It is the second Wimpy Kid based island and is loosely based on Dog Days. It also has all the characters in color.

Talk to Greg, and you'll see his 20 dollar bill get blown away and stolen by some teens. Run to the far right of the boardwalk, and ask if you can have a picture taken with the Cardboard Woman Cutout. After your picture is taken, the man will give you free sunblock, too. Give the sunblock to the hairy guy even farther to the right, and he'll give you oily suntan lotion in return. Go back to the left, and you'll see the teenagers with Greg's money. They run away whenever you approach them, so ignore them for now. Walk to the right again and you'll see a seagull flying with a keychain. Grab it and give it to the man with the metal detector, who gives you his detector in return. Search the sand with the metal detector, and you'll be able to dig up tokens. When the light flashes, you're getting closer, and when it's green, you can click on it to get a token. You'll only need a minimum of five tokens to finish the island, but it's a good idea to get more. Keep in mind that this isn't the only way to get tokens, and that you can find them around the island as well.

Now it's time to play some boardwalk games! You can play them in any order you want, but you'll need to complete them all to get the grand prize.

The only game you won't be able to win is Himalaya Hurl, and that's because it's purely luck-based. For now, go to the left side of the boardwalk.

Climb The Cranium Shaker and grab the trash can lid. Put it on the trash can with the bees around it, then push the can to the cotton candy and take off the lid. Dig through the trash and find the popcorn bag. Get a free popcorn refill, then go back to the rightmost side of the boardwalk. Dump the popcorn near the lady on the purple towel, and some seagulls will cause her to run away. Use the metal detector and look under her towel to get some car keys. Go back to the left and give the car keys to the woman outside the fun house and she'll give you flip flops.

Go to the arcade on the right side of the boardwalk. Put on the flip flops and jump on the top of the area to get the Flying Disc, then give it to Shawn Snella. He'll tell you that if you jiggle the claw on the claw machine, you can play for free. Use that technique and play the crane game until you get some fake vomit. Go back to the leftmost part of the boardwalk and put the fake vomit down the clear out the line for the bumper cars. Bump into Rowley's car until he drops his lucky rabbits' foot. Then go back to Himalaya Hurl, and you'll be guaranteed to win. If you've won every boardwalk game, you'll get the jumbo prize. Trade it with the kid with the remote control helicopter by the Cranium Shaker.

Enter the fun house again, and you'll see Rowley stuck in the slide. Use the oily suntan lotion to free him, and as he falls into the ball pit, he'll uncover Fregley. Fregley's Mother will give you his leftover fish sticks. Go back to the rightmost part of the boardwalk. Use your fish sticks to hang them from the helicopter, and use that to bait the crab that goes in and out of the water. Go to Greg's dollar bill and let the crab grab it. Approach the teens, and they'll run away. Greg's money is safe, and he'll thank you. Congratulations! You've completed Wimpy Boardwalk! 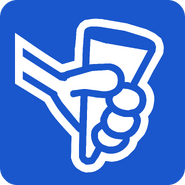 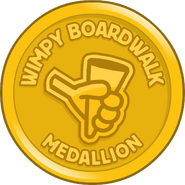 The island's medallion.
Add a photo to this gallery

Island Medallion
Add a photo to this gallery

Retrieved from "https://diary-of-a-wimpy-kid.fandom.com/wiki/Wimpy_Boardwalk?oldid=165247"
Community content is available under CC-BY-SA unless otherwise noted.