The Wii  (/ˈwiː/ WEE) is a home video game console released by Nintendo  on November 19, 2006. As a seventh-generation console, the Wii competed with Microsoft's Xbox 360  and Sony's PlayStation 3 . Nintendo states that its console targets a broader demographic than that of the two others.[21] As of the first quarter of 2012, the Wii leads its generation over PlayStation 3 and Xbox 360 in worldwide sales,[22] with more than 101 million units sold; in December 2009, the console broke the sales record for a single month in the United States. It is Rowley's console in the movie . It has not been seen in any other media since the movie until it was seen in the sixth book Cabin Fever. 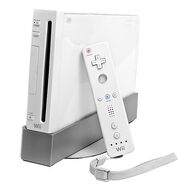 A real life Wii
Add a photo to this gallery
Retrieved from "https://diary-of-a-wimpy-kid.fandom.com/wiki/Wii?oldid=146640"
Community content is available under CC-BY-SA unless otherwise noted.