Diary of a Wimpy Kid Wiki
Register
Don't have an account?
Sign In
Advertisement
in: Male Characters, Adults, Recurring Characters,
and 24 more

Vice Principal Roy is the current vice principal of Greg Heffley's middle school. He has appeared throughout the Diary of a Wimpy Kid series, with his latest appearance being in Big Shot. In the film adaptation of Diary of a Wimpy Kid, he is played by Raugi Yu.

In Diary of a Wimpy Kid, he stopped Greg from trying to write fabrications about Marty Porter for Student Council.

In Diary of a Wimpy Kid: Rodrick Rules, he appears talking to Greg about the Invisible Chirag joke but took Sharif instead of Chirag before Greg fakely apologized, he gave him a pat on the back and a lollipop.

In Diary of a Wimpy Kid: Cabin Fever, he appeared after being absent for 3 books. During the Anti-bullying Sign Contest, when the girls were fighting over their signs, Mr. Roy had to step in to stop the event from turning into a full-scale riot. When Greg made a newspaper, he didn't like his idea (as it was unauthorized) and confiscated them. When the school was damaged, he told Greg about his punishment and had him clean the mess even in spite of Greg telling him what really happened, possibly because of Greg not letting him know earlier.

In Diary of a Wimpy Kid: The Third Wheel, when pantsing becomes a problem at school, he gives the boys a talk about it, but then he gets pantsed from under the bleachers by a student who gets away and later becomes known as the Mad Pantser.

Vice Principal Roy appears near the end of the book when Mrs. Merritt brought Greg to his office when she caught him using a Magic 8 Ball during a quiz and thought he was cheating. Although he was confused by the claim, he later brought Susan over where she managed to bail Greg out. Later, he tells Greg that his grades are slipping. If Greg doesn't improve them, he'll have to go to summer school, although Greg thinks he may only be trying to scare him.

The janitors went to Vice Principal Roy because they want to put together a team for Field Day because they want a day off just as much as the students. Vice Principal Roy also caught Jesse Range accepting his payment, behind the school, after the race, and made an announcement that everybody would get Friday off as many of the teams were cheating.

In the first movie, he has a Chinese decent that was played by Chinese-Canadian actor Raugi Yu. He only appeared in the T.V. advertising the Safety Patrol and when he announced that Zoo-Wee Mama was the winning comic in the school newspaper. He wore a grey suit and a tie.

In the book, he has a round head, a similar hairstyle to Frank Heffley, a beard which covers most of his mouth until the starting of his semi-circle nose. He has ears which has a dot a curved line besides them that resemble the insides. He wears an old-fashioned buttoned suit with a bow tie and trousers and shoes about the size of Greg's. 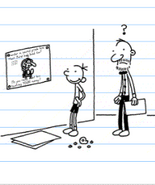 Greg and Vice Principal Roy in the online book

Vice Principal Roy gets pantsed by the Mad Pantser

Vice Principal Roy in the film

Vice Principal Roy in his office

He talks about the 'honest tip box' at an assembly

Vice Principal Roy talks to Greg about the vandalism