This article is a stub. You can help the Diary of a Wimpy Kid Wiki by expanding it.

Tyler Post is the son of Bob Post and the current writer of a comic strip called Li'l Cutie that his father created. He appears in Dog Days and its movie adaptation, where he is played by David Bowers, who also directed the films.

It's widely believed that the main character in Li'l Cutie was based on Tyler when he was a child. Greg Heffley speculates that Bob Post began to have trouble coming up with new material after Tyler grew up, which may have led to the comic's initial retirement.

Tyler, 32 at the time, eventually decides to take over the strip, since he didn't have a job or any big plans and was living with his father. After seeing his first strip in the newspaper, Greg believes that it will be "worse than ever". 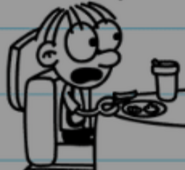 A news article about Tyler Post and Li'l Cutie.

Cameo appearance (right)
Add a photo to this gallery
Retrieved from "https://diary-of-a-wimpy-kid.fandom.com/wiki/Tyler_Post?oldid=161032"
Community content is available under CC-BY-SA unless otherwise noted.