Trista is a minor character who appears at the end of The Last Straw and the beginning of Dog Days. She moved onto Surrey Street and the end of the third book and introduced herself to Greg and Rowley. Greg instantly had a crush on her along with Rowley. Greg noticed this and imagined himself knocking out Rowley and becoming girlfriend and boyfriend with Trista. However, Greg soon had another idea and decided to use the Jefferson's Country Club membership to get him and Trista into the club and using Rowley as their slave.

However, at the start of the fourth book, they took her to the club but she met a Lifeguard and hung out with him, forgetting about the two people who invited her.

In Cabin Fever, she was present in Greg's class when Vice Principal Roy called Greg to his office. She has never appeared in the series since.

Trista sitting behind Greg as he is called to the principal's office. 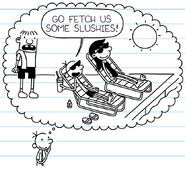 Greg imagines relaxing with Trista at the country club.
Add a photo to this gallery

Retrieved from "https://diary-of-a-wimpy-kid.fandom.com/wiki/Trista?oldid=144117"
Community content is available under CC-BY-SA unless otherwise noted.