The Wimpy Kid Movie Diary is a book about how the Diary of a Wimpy Kid movie was made. The book was released on March 16, 2010. In this book, you will find out how Greg Heffley started, how the whole movie was made, where the movie was filmed, and other aspects of the movie. The book's color is white. Also, the book features a scrapbook at the end which features scenes from the movie. It is dedicated to Zachary Gordon and Robert Capron. There is a re-print of the book about how the Rodrick Rules movie is made along with the first movie as well. Unlike the usual Diary of a Wimpy Kid books, the texture is different.

The book starts with Jeff Kinney saying that one day he drew a character named Greg Heffley in January 1998. The next month, Zachary Gordon was born on the other side of the USA. Greg and Zach did not have many things in common back then but 11 years later these two will come together when Zach was casted to play Greg in the live-action Diary of a Wimpy Kid moive. The ideas for the Diary of a Wimpy Kid series was written down in a sketch pad that took four years to fill up, then each page was put together into a 1,283-page book that was published online, the following year later an editor decided to publish the book as a printed book. Zach Gordon is now working as an actor in film and television, a few months later, he read the book and told his mom that if someone made the book into a movie, he wanted to play the role of Greg Heffley. A few people in Hollywood were thinking of making Diary of a Wimpy Kid into a movie but with different ideas, eventually, a movie studio came up with an idea that the film should be live-action that worked. While producers, studio executives, and writers work on the screenplay, they were also looking for a director, they finally chose Thor Freudenthal as the director for Diary of a Wimpy Kid because he had interesting ideas on how to adapt the book into a movie and kept a journal with illustrations. The studio then searched for the kid who would play Greg Heffley, they eventually chose Zachary Gordon as Greg Heffley for "nailing" his audition. The studio then cast Robert Capron as Rowley Jefferson.

After Zach and Robert proved they understood their roles in the movie, the producers searched for a place that looked like a typical American town, they settled on Vancouver, Canada because the schools and suburbs looked like a typical American town. Then a crew was hired to operate cameras, design costumes, work with sound and lightning, and basically anyone who is not an actor but is involved in the making of the movie. By the time the studio green-lit the movie, Steve Zahn, Rachael Harris, and Devon Bostick had been cast as Frank, Susan, and Rodrick Heffley. The cast met in Vancouver and got to know each other. More roles in the movie were filled like Harrison Houde as Darren Walsh, Karan Brar as Chirag Gupta, Laine Macneil as Patty Farrell, Grasyon Russel as Fregley, and Connor and Owen Fielding as Manny Heffley. The movie makers then put a slice of Swiss cheese as the cheese on the blacktop to study the effects of the sun, and the cheese in the final version of the movie was actually computer-generated with a piece of silicone as a starting point then stages of decay was added by the VFX department. After the line producer works on the shooting schedule and the director worked on his own storyboards, the costume designers created costumes for the actors.

Location scouts then looked for a school, they chose three schools, Shaughnessy Elementary School was used for it's exterior, Van Tech Secondary School was used for its gymnasium, and Templeton Secondary School was used for it's classrooms, hallways, and auditorium, all were used to create Westmore Middle School. Graphic designers then created school colors, a mascot and a logo, print materials, fake trophies, posters and student-created artwork, comics, and much more for Mr. Winsky's office. It was time to start filming the first scenes, along with filming the child actors also learn in a special school created inside of a trailer, the child actors also get acting coaches to guide them on acting. Background people called "extras" were added in filming.

A new and updated version of the book was released on February 15, 2011. The new edition has a few pages of how the second movie, Rodrick Rules, was created. It includes pictures from the movie, and behind the scenes pictures. In behind the scenes, This edition starts off with the success of the first movie so the film team started working with the sequel. Most of the actors came back but there's new actors such as Fran Kranz(Bill Walter) and Peyton Roi List(Holly Hills). We also learn that Zachary Gordon (Greg Heffley) secretly pinned clothes pegs on crew member's backs, so as revenge, after Zach's last recording the whole crew give him a piece of his own medicine.

These extra features are at the very end of the book. The cover of the book is the same, except it has a blue circle with Rodrick's head in it above the cheese. "How Greg Heffley went Hollywood" is also above Greg's head instead of below him.

In the month of July, a Dog Days edition of the Movie Diary was released. It includes extra pages with behind-the-scenes for the third movie. It also features a new cover.

Unlike the first three, this book only provides information about The Long Haul and is a separate book rather than an edition. In the book, the old actors that played Greg(Zachary Gordon) and Rowley(Robert Capron) had outgrown their roles and is entering college so they had to be replaced with a new cast. The Beardos have three sons, but in the movie, they have two sons and a daughter. Patrick Kinney (Jeff Kinney's brother) makes an appearance. Jason Drucker's Dad appears as a fan dressed in a Twisted Wizard costume. Jeff Kinney, the author of Diary of a Wimpy Kid runs a booth at the player expo. This book came out on May 9th, 2017. 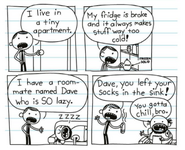 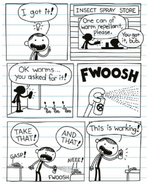 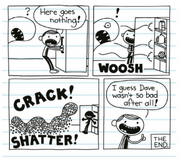 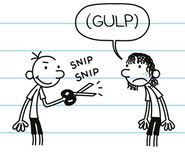