Diary of a Wimpy Kid Wiki
Register
Don't have an account?
Sign In
Advertisement
in: Books, Side books, Jeff Kinney,
and 4 more

The Wimpy Kid Do-It-Yourself Book is the revised and expanded edition of Diary of a Wimpy Kid Do-It-Yourself Book, released on May 10, 2011, nearly 3 years after the original. The hardcover version contains 16 new pages of full-color comics (bringing the total up to 32) and contains 60+ pages of new pages. It also has a new cover. But due to there being new pages, the pages where you write your own journal has decreased since the new book had 45 pages of writing your own journal, while the old one had about 80 pages of it. It is also the only version you can now buy.

To promote the book release, Jeff Kinney made the contest on the Wimpy Kid Website. Over 3,000 comic entries were made and sent to Jeff Kinney. The first place winner ends up with a New Jersey kid named Chudney Patterson. Chudney's comic was also in the DIY Winners page, which is at www.wimpykid.com\diywinners. There are also 20 runner-ups on the page, making 21 winners in total.

A Picture of Manny in the book doing some cooking. 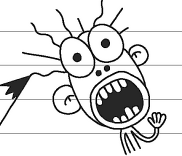 Random characters on the main page.

"What're You Going To Do With This Thing?"

The Design your own HAUNTED HOUSE page