“"I've cut up some orange slices for you, sweetie!"”
―The Grout pretending to be Susan (in Greg's mind)

The Grout is one of Greg's worst nightmares as a little kid. It is the main antagonist in Diary of a Wimpy Kid: Wrecking Ball. Greg had a fear of grouts since he moved in as a kid. He first had feared that when his parents were talking while Greg was in his bedroom, Susan pointed out that "The grout in this bathroom is really nasty!" What Greg didn't know then was that the grout in his bathroom was just gritty hair in the tiles. But when Susan said the word, it put a picture in his mind that he imagined being a large, hairy creature. Once, Greg told Susan about how the grout put a picture in his mind, but Susan laughed and told him that Grout was just hair in the drain, this led to Greg believing Susan was the Grout. Greg eventually forgot about the Grout, until Frank pulls hair out of the shower drain, leading to Greg believing the Grout is still alive. 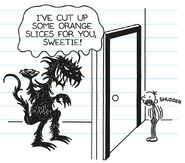 Goof: The hockey stick somehow floats.
Add a photo to this gallery
Retrieved from "https://diary-of-a-wimpy-kid.fandom.com/wiki/The_Grout?oldid=167358"
Community content is available under CC-BY-SA unless otherwise noted.