The Amazing Fart Police, abbreviated as the F.P., is a comic that deals with random men dressed as policemen that have "FP" on their caps and arrest anyone that farts, even in the bathroom. The fart police believes that girls don't fart, so even when they do, they blame the men that are the nearest to them. It is only in the Diary of a Wimpy Kid: Do-it Yourself Book. They are two characters.

In the first comic, a graduate called Joey is being congratulated and his aunt Lydia comes to hug him, but by doing so she makes Joey fart. The fart police comes and arrests him. Later, a man farts in the bathroom and the police arrive there arresting him, he says he thought public bathrooms were free farting zones but is still arrested. Later in a suburbs the sound of a loud fart is heard and the Fart Police arrive there, the man claims his daughter had farted but they believe girls can't fart so they arrested him. Later a man is suspected for farting, but it turns out there was a duck in his pant. Later it is mentioned that they invade a burrito factory. 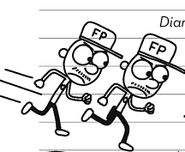 Retrieved from "https://diary-of-a-wimpy-kid.fandom.com/wiki/The_Amazing_Fart_Police?oldid=123017"
Community content is available under CC-BY-SA unless otherwise noted.