Sweetheart (Sweetie Pie in the online book) or Sweaty (By Rodrick Heffley), known as simply Sweetie, is a dog that Frank got when his dad told him that he ran over his old dog Nutty with his car. Sweetie is fond of Susan and Gramma just like how the pig is fond of Manny.

In Diary of a Wimpy Kid: Dog Days, Frank got angry when Grandpa told him Nutty was run over by the car and didn't run to a butterfly farm. Frank went and got a dog, which Greg wanted to name "Ripjaw" or "Shredder" However, his request was not needed for being deemed "too violent", while Manny wanted to give him animal names such as Zebra with "Zeeb" for short and Rodrick chimed in suggesting Turtle, with "Turd" for short. Susan then named it Sweetie (Manny in the movie), even though the dog was a male. Greg had problems with Sweetie, he would sleep on Greg's bed giving him very less space to sleep. He would also bark whenever the commercial on gophers didn't play on the TV because Frank once said, "Look at those Gophers, Sweetie." Later, Rodrick was sent to get a bowl with his name, he got the name wrong, because it says the name "Sweaty" instead of "Sweetie". Later Frank gives him to Gramma, since nobody is enjoying the dog.

In Cabin Fever, Gramma has been over-feeding Sweetie and even giving him table scraps and is now heavily overweight. Greg says that "you'd hardly know he's the same dog, as he looks like a tick about to pop."

As shown in The Third Wheel, the Heffleys still have his exercise pen, and whenever Susan holds a playgroup for little kids, Manny takes his toys and locks them and himself inside his pen.

In Hard Luck, it is shown that Gramma dresses him up like a little person, so he could be seen wearing a suit. Greg and Rodrick would also make raspberry sounds behind him which would make him look behind then go back to sleep. Frank tried it once, but Sweetie actually farted on his face. Due to being fed alot by Gramma, Greg referred to him here as "a beach ball with legs."

Role in The Long Haul

In The Long Haul, it is shown in a flashback that Greg once ate some whoopie pies, but Susan thought it was Sweetie, and since chocolate is not good for dogs, she had to get his stomach pumped.

In The Meltdown, it is shown that when Gramma takes her dog Sweetie to a beach. He was shown lying down on the beach down south soaking up the sun.

In The Deep End, it is shown that Sweetie has his own room in Gramma's house, as Greg tries to move in his room.

Sweetie is lazy and mischievous. As shown as he lies around all day and when he made Greg chase him through the neighborhood in his underwear. Sweetie doesn't take a liking to most people, mostly for what they do to him, like Frank, who constantly seeks his attention and annoys Sweetie to no end. He usually dawns over the comfort of Susan, even though she doesn't like Sweetie as much as Frank does.

In the movie, Sweetie is a Labradoodle because it was mainly all the cast and crew could settle on based off of his appearance. Greg is never really that fond of Sweetie. He is a dog rather than a puppy, and his name was given by Manny rather than Susan. Unlike the book, they don’t give Sweetie away and end up keeping him.

In the Online Book

Sweetie doesn't look much different in the online book since he is a dog, not a human. He is also quite small in the online book, about the size of a sock. It's unknown why he was so tiny in the online book. Sweetie plays a role quite similar to the one in the book. At Rodrick's party, some girls who are looking at the photo of the family with him in it say he is very "cute". When Rodrick tells them that he is in the basement, Greg thought they were talking about him, until Rodrick took Sweetie and locked the door. In this version, he is quite attracted to Greg's mother Ann (Susan's name in the online book).

On Wimpy Wonderland Island, in Rodrick's room, you can find a dog bowl that says "Sweaty" on it, like the bowl Rodrick got for Sweetie. This bowl is later used to distribute antifreeze.

In the Dog Days movie advertisement, go to the edge of the pool, and you'll see Sweetie next to the "Sweaty" dog dish.

Sweetie after being overfed by Gramma in Cabin Fever.

Sweetie in the online version 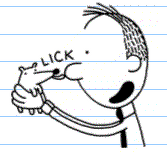 Sweetie being overfed by Gramma.

Add a photo to this gallery
Retrieved from "https://diary-of-a-wimpy-kid.fandom.com/wiki/Sweetie?oldid=167599"
Community content is available under CC-BY-SA unless otherwise noted.