Diary of a Wimpy Kid Wiki
Register
Don't have an account?
Sign In
Advertisement
in: Protected articles, Main Characters, Antagonists,
and 36 more
English

Susan Heffley (known as Ann Heffley in the online book), is the wife of Frank Heffley and the mother of Rodrick, Greg, and Manny Heffley. She is a former member of the PTA who once worked as a preschool teacher, and once was the substitute teacher in Greg's class. She normally appears as a major character in the Diary of a Wimpy Kid series, but she plays the main antagonist in Dog Days, Double Down, and the film adaptation of The Long Haul.

In the first three Diary of a Wimpy Kid movies, Susan is played by Rachael Harris, with that role being filled by Alicia Silverstone in the fourth movie in 2017.

Susan is a rather loving and caring mother, but she constantly embarrasses Greg and Rodrick (mainly Greg) and appears to never care. Susan obviously knows very little about older children and often humiliates, embarrasses, and ignores Greg and Rodrick, much to their dismay. She thinks everyone would understand about Greg's accident, even if the kids in his grade don't. Also, she shows immense favoritism towards Manny. Susan has been shown to have very neat handwriting, as whenever her writing is shown it is very fancy, almost in a 1960s fashion. She constantly tries to pull the family together, by getting Frank and Greg accustomed to Rodrick's band, trying to get Greg, Rodrick and Manny to become close to Frank, and attempting to get Greg to enjoy reading "real" literature, but none of her plans ever seem to work, and often end up in rather disastrous consequences for Greg and Rodrick and sometimes even backfiring on her completely. At one point during the Deep End, Susan tried to get the family to attend the Pool Party at Camper's Eden for a special night until a group of kids flipped them over when they got onto an airplane tire. The incident apparently scarred Susan physically and mentally so much that she immediately gave up on the pool party. Additionally, she puts individual desires below family desires; she rarely lets anyone in the family come to a decision about an outing or purchase without her permission, resulting in her always winning. Susan is also shown to not accept criticism very well which may be the reason why she refuses to listen to anyone who point out flaws in her thinking.

According to Greg, she completely spoils Manny, giving him many privileges to Manny that she never gave to Greg or Rodrick when they were younger, such as bringing toys to church to keep himself entertained and buying new clothes for Manny while giving Rodrick's old clothes to Greg. Susan even allowed Manny to verbally abuse Greg by calling him "Ploopy" (though she may have not paid too much attention to the whole matter because Greg interrupted her in the middle of a call and thus she was angry) and only put a stop to it when Greg called Manny, "Ploopy" for revenge. Susan dotes on Manny to the point where she doesn't scold or punish him at all. She even once drove all the way to Manny's pre-school just to cut an extra-slice on his sandwich. She also appears to give Manny a lot of money, even when he potties without being told (although this is not a big thing since he is already potty-trained) and also if his brothers swear in front of him, according to Greg he got up to $150 in American dollars. However, it's shown sometimes that Susan will correct Manny if she sees it necessary: for example when Manny destroys Greg's gaming console, Susan talks with Manny and makes him realize that what he did was wrong, leading Manny to make an aluminum foil ball with toothpicks to compensate Greg (though Susan eventually let him throw it to the trash as Rowley got injured with it) and while she doesn't punish Manny when he cuts all electricity on their house to the point they nearly starved just because she didn't teach him how to tie his shoelaces, Susan is seen to not be so happy with Manny when she teaches him how to tie his shoelaces. She also tries to refuse a pig that Manny won by pure chance (when he just happened to guess the weight of a hog right) because they only entered for fun. Sometimes she would ruin the party (for example, she tried to turn the wild party into a carnival-styled, non-violent party, much to the boy's anger) and not listening about Greg for kids these days.

Susan has a more different look from the rest of her family in the online and book version. Like her husband, she has an egg-shaped face. She wears large glasses that cover up her eyes. She has appeared in the series without glasses while sleeping. She has tall dark round hair (not used by anyone else) and she wears normal pants, either sweatpants or slim jeans, and a sweater. In The Third Wheel, a flashback photo shows she didn't need to wear glasses and had longer hair.

In the movie, Susan is played by Rachael Harris and, just like other members of her family, has brown hair and a flawless complexion. She also appears with her trademark glasses. Unlike in the book and online version, she wears make-up in the movie. She is played by Alicia Silverstone in The Long Haul movie.

Susan was born to Gramma and Grampa and had 4 sisters. Susan was born in a different state. Her favorite book was Little Women. Much of her childhood remains unclear, though it is implied she was raised on a farm she hinted she did not often get along with her siblings that much. She mentioned in The Deep End that she met some of her best friends at summer camp.

Susan played for her Middle School basketball team The "Huskies" as a backup point guard. In one of her matches the regular point guard got hurt so with the score tied in the fourth quarter she had to go and take her place. She did well, but with the clock winding down she got double-teamed, so she had to heave the ball up at the buzzer and her shot didn't succeed. Later, Susan told her son, Greg, that she's glad it happened because it taught her how to deal with failure.

She attended summer camp and played the French Horn in high school, the rest is unknown.

After finishing high school, she met Frank Heffley and fell in love with him and they went to Isla de Corales in their honeymoon they got married in and lived in a small apartment and after that, she gave birth to Rodrick Heffley.

Some time later, Greg was born. She let him sleep in the dresser drawer while Rodrick slept in a crib. They moved to their current house in Plainview on an unknown date. Years later, Manny Heffley was born. 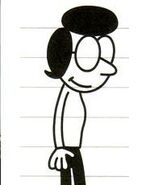 Susan Heffley in the hospital with her newborn baby, Manny. 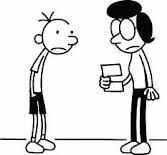 Susan not wearing her glasses 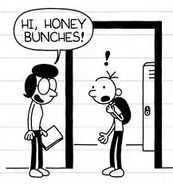 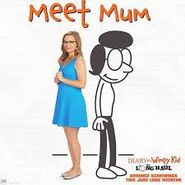 Susan as a Cartoon and her Actor

Susan is Bathing Manny in Sink

Rowley, Greg and Susan are screaming one another at the Gramma's Basement when she cames with her laundry.