Surrey Street (Surrey Circle in the online book) is the neighborhood where the Heffley Family, Jefferson Family and some other families live in.

The Garza twins and their family

Marlee sisters and their family

In The Meltdown, Greg creates his own clan, which has a bloody axe and a wolf on it. The others immediately target him, but later take on his approach. They re-unite shortly after and defend themselves from Lower Surrey Street. 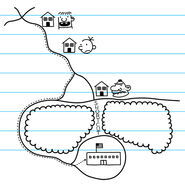 Add a photo to this gallery
Retrieved from "https://diary-of-a-wimpy-kid.fandom.com/wiki/Surrey_Street?oldid=164958"
Community content is available under CC-BY-SA unless otherwise noted.