Start a Wiki
The See-and-Talk is a toy where you pull a string, the arrow spins and it says the name of the object it landed on. It is seen in Double Down when the pig is sometimes able to use it to make full sentences and understand English, and when Rowley uses its sounds to try to scare off the geese. It is a toy owned by Manny. 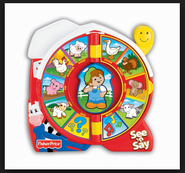 Rowley using the See-and-Talk on television
Add a photo to this gallery
Retrieved from "https://diary-of-a-wimpy-kid.fandom.com/wiki/See-and-Talk?oldid=136391"
Community content is available under CC-BY-SA unless otherwise noted.