Rowley Jefferson is Greg's best friend and is usually the deuteragonist of the Diary of a Wimpy Kid series. He has had a major role in nearly every book (with the exception of the 9th, 10th, and 12th books). He has overprotective parents who aren't fond of Greg's behavior (specifically Mr. Jefferson, but his mother can also seemingly get annoyed by Greg too), assuming that he is a bad influence (which for several reasons he is). He was the main antagonist in Diary of a Wimpy Kid: The Third Wheel, and secondary antagonist of Diary of a Wimpy Kid: Hard Luck. He is often seen as an anti-hero in the series, despite being the main character's best friend, as he often does idiotic, nonsensical things, which results in getting Greg in trouble while he gets off scot-free. Despite this idiotic behavior, though, Rowley always wishes the best for everyone, and is a very nice and innocent kid. Rowley is an immature boy in several ways. For example, he sleeps with his stuffed toys, he likes his Dinoblazer Action Figures and he even quit writing his popular comic, Zoo-Wee-Mama, because he needed time to play with his Dinoblazer Action Figures. He also likes a singer called Joshie, whose audience is young children, mainly girls. On Christmas, he gets many childish things, even giving Greg childish toys like a Big Wheel. In the second film, he got very scared after watching a horror movie called "The Foot," and had to get his parents to take him home.

In the fourth book, he kept his eyes covered the entire time while Greg tried to watch the horror movie, Hello, You're Dead. Also, when he was sleeping in a beach lodge, he got a nightmare that there was a chicken under the bed, which made him scream out loud. His parents calmed him down and Rowley went and slept in their room. In the movie, he goes with his parents to nearby places. If not, then he'd have to follow Greg. In the book, he went in kiddie rides for little kids while Greg was in the Cranium Shaker, a ride that was meant to terrify and disorientate its riders. In Dog Days, his dad scolded at Greg for not showing up from 10 minutes.

When it's his birthday, he goes to childish places and invites kids in his karate class who are about 8-11 years old and is happy even when he gets childish toys. He is also a fun, loving boy, that many like more than Greg Heffley usually. He is a good friend of Greg and despite the fact Greg often uses him (carry his stuff, give him piggy-rides, write English work for him and scout for dog droppings) he still doesn't question or go against Greg and is willing to be much like Greg.

Rowley is best known for being a good best friend to Greg. Rowley is quite immature and seems a bit naive which Greg takes advantage of him by manipulating him, but his charming, cheerful, and innocent nature makes him more popular with other students (particularly the girls) than Greg. His friendship with Greg is arguably more legitimate and developed in the films than in the books. In the novels, Greg primarily uses Rowley for personal gain and always pushes him around, though they are legitimate friends nonetheless. In Dog Days, he smashes "The Muddy Hand", which is really Gregory's hand. He is sometimes an enemy, but most of the time he's a "good guy". Rowley has a pure soul and knows that Greg loves him deep down.

In the movie series, Rowley is a boy with a thick build and long bowl-shaped hair that is orange and is wider than Greg's, but his hair is golden brown in Rodrick Rules and Dog Days.

In the book series, he has 7 strands of hair that is flat on his head and is wider than Greg's. He has two large teeth and his mouth never appears to be closed, except for a few occasions.

In Hard Luck, since he started dating Abigail Brown, he combed his hair differently and had 8 strands rather than 7. After the break-up, he goes back to his original look.

Rowley as a baby 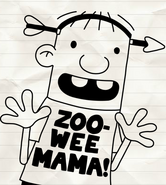 Rowley as the wingman of Greg.

Rowley gets his tie cut at Corny's

Rowley gets pantsed by the Mad Pantser

Rowley with Greg and Chirag 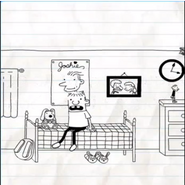 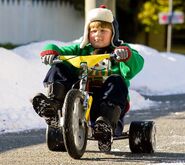 Rowley sleeping over with Greg in the Rodrick Rules film.

Want to come over to my house and play?

Rowley in the Long Haul

Rowley holds his cabinmate, Gareth, as Jeffrey is getting ready to perform a trust fall.

Jeffrey fall and bangs into Rowley and Gareth, making them collapse and smash into each other.

The nurse could not pull Gareth's tooth out of Rowley's forehead because it was still lodged.

Rowley gives Gareth back his tooth in a jar after he got infection.

Rowley tosses poison ivy onto fire and smothers it.

Rowley falls down in the snow while his friend, Greg Heffley makes his face palm.

Rowley and Greg being chased by Geese.

Rowley, Greg and Susan are screaming one another at the Gramma's Basement when she cames with her laundry.

Rowley being ambushed by the guys attacking him and Greg during the snowball fight.

The two actors who played Rowley

A drawing by Rowley.

In the Poptropica Hard Luck ad.

In the Poptropica Third Wheel ad.

Greg chasing Rowley with a stick

Manny showing his butt to Rowley 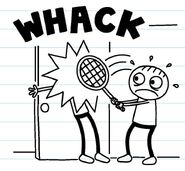 Rowley in Diary of a Awesome Friendly Kid

Rowley trying to get rid of the finger trap.
Add a photo to this gallery

While in the book his age is unknown, it's possible he could be anywhere from 11-14.

Retrieved from "https://diary-of-a-wimpy-kid.fandom.com/wiki/Rowley_Jefferson?oldid=137027"
Community content is available under CC-BY-SA unless otherwise noted.