This article is a stub. You can help the Diary of a Wimpy Kid Wiki by expanding it.
Warning: The following page/section contains spoilers. Please read at your own risk.

Grab a flashlight, crawl under the covers, and dive into the twisted, unexpectedly hilarious world of Rowley Jefferson’s imagination. You’ll meet zombies, vampires, ghosts and much more in these comically terrifying tales.

Rowley’s spooky stories might leave you laughing, but beware, you could end up sleeping with the lights on!

Please note that this section is under construction/not finished.

Once there lived a boy called Rowan who had loving parents and loved playing with his toys. He brought his toys to school but was bullied because of that, so he stopped bringing them. His classmates bullied him because they always wanted to seem that they are older than they really are. One day Rowan felt a tickling sensation under his armpit so he asked his teacher to go to the restroom. When he got to the bathroom, he discovered hair was growing under his armpit. So he went back to class and pretended that nothing happened. After school Rowan got home and wanted to pull the strange hair with tweezers, but now there was hair under the second armpit too. Suddenly even more hair started growing and soon Rowan was covered in it. He then found a hair remover, deciding to use it. But he ended up fainting from the fumes. Rowan woke up in his bed, still covered in hair. But his parents were happy about it for some reason! They decided to have a Talk with their son, and Rowan asked if he's becoming a man. But that made his parents laugh. His dad revealed Rowan is actually a werewolf. Then the parents told him that he comes from a big family of werewolves. And that's when Rowan understood that he actually sometimes saw proof that he is a werewolf. He started crying, but his parents (also werewolves) said that everything will be fine as long as no one finds out who he really is. Rowan knew the bullies would bully him even more. Then Rowan asked his parents about werewolves eating people, but his parents said that they will discuss this on an another Talk, feeling awkward. Then Rowan had an idea: the next day he brought toys to school and started playing, revealing that he's a werewolf - the bullies feared him and didn't bully him. So the rest of the family stopped hiding that they are werewolves too.

There once lived a boy called Jasper who loved pulling pranks. Sometimes he even played pranks on his family members, like gluing his mother's furniture to the ceiling. His most famous prank was putting the Mayor's underwear on a flagpole. People thought his pranks were hilarious until he made a prank on them. One morning, Jasper woke up and started deciding who to prank today. He decided to replace the baker's cream-filled doughnuts with toothpaste, and when he went to the bakery, he noticed that Marian and Miki, citizens of the village, ignored him. The librarian and his best friend ignored him too. When the baker, Joris, was distracted, he tried to reach the doughnuts but his hand went right through them! That's when he discovered he couldn't see himself in the mirror. Jasper realized that nobody could see him, and all the people ignored him even when he made a total fool of himself! He tried that again in the Mommy and Me club, but people were still ignoring him. That's when he realized that he could pull awesome pranks with being invisible. But then he saw people he knew dressed in black - they all were sad. Jasper's mother was one of those people. Jasper followed the people to a funeral, and he sat near them. The preacher told the people that a boy died while trying to pull a prank, and that boy turned out to be Jasper. When the people were remembering Jasper, they didn't say any nice things, only remembering his awful pranks. And it was hard for Jasper to watch when his mother cried near his coffin. The invisible Jasper decided to say goodbye too, even though it felt weird. But suddenly Jasper saw that there was nobody in the coffin - only a pumpkin looking like Jasper's head. That's when the people revealed that Jasper was not invisible - it was a big prank. The baker revealed that the doughnuts were just a hologram. And Jasper couldn't see himself in a mirror because all the mirrors in the mirror shop were replaced by TVs showing an empty pavement. The people from the Mommy and Me class revealed that they actually saw Jasper and that it was hard not to laugh. The whole village was trying to make the prank work. Then the preacher said that it was a double prank, because a meteor actually crashed in the village, so all people including Jasper were now ghosts. But Jasper was only happy, because now he could fly, so he jumped from the top of the lighthouse to fly to Paris... but it was just a second prank, and Jasper fell, and that's when the people understood they went overboard.

There were two best friends named Rusty and Gabe. Sometimes, Rusty found Gabe annoying but when Gabe died later that year, Rusty wished he could have him back. However, Gabe's ghost arrived and they started off very happy but Rusty found Gabe's ghost abilities annoying and he couldn't do his homework, got bad grades, never got a girlfriend. Rusty grew up and Gabe stayed with him, though Rusty sometimes thinks that he made the wrong choice.

Lilli was a girl. From when she was a baby, she liked putting things in her mouth and occasionally, put her parents' things in her mouth as well. Her doctor said she was teething to her parents. Lilli's teeth started to come in and they were really sharp. As Lilli got older, she had playdates but the other kids always ended up crying because of you know what. She was bought books about not biting but she never stopped. Plus books were one of the favourite things Lilli liked to chew on. Lilli was now old enough for kindergarten but her parents didn't warn the teacher that Lilli liked to bite people and she bit the teacher so she got sent home early. Lilli's parents saw the doctor and she said Lilli was a vampire. Lilli's mother then remembered how Lilli had become a vampire and she started considering Transylvania: School for Biters. A few weeks later, the doctor said that Lilli actually wasn't a vampire and they kept it a secret between themselves.

The story starts by talking about the Headless Horseman, but the topic quickly changes to a kid called Anders who was born without a body. On the first day of middle school, Anders makes friends with the Headless Horseman (Real name Gunther) before he became evil. The story fast-forwards to the Valentine's Dance, where Anders and Gunther disguise as one person to dance with a girl called Prudence. The dance was successful until an accident blew the duo's disguise. They start to fight over Prudence, with Prudence dating both for different reasons. One day, Anders suggests Gunther to propose but Gunther was rejected, making him evil. Prudence marries Anders and lived a fulfilling life.

There is an announcement for a high-tech security scanner to be released at airports, which can scan multiple people at once. Everyone is excited and scientists are forced to rush the project. When it is released, everyone who walks through it (though some people do not) becomes a skeleton. At first, the skeletons are happy because they don't have to do certain things that they would before. However, many shops start to shut down, everyone looks the same on Halloween, parents collect the wrong kid from kindergarten and more trouble. The skeletons become angry but the scientists don't know how to reverse it. The skeletons break into the airport, storming it and collecting the scanner, which they destroy, turning them all back.

a Curious kid named Ryan liked to look everywhere, because he was so curious. one time, his parents told him to NEVER go in the medicine cabinet in the bathroom. but he couldn't stop thinking about what was in it, so he waited until his parents were asleep, then he went in. he found some makeup, and rubbed some on his cheeks, just for fun. when he woke up the next morning, (needs to be finished)

The people of Fairview are very happy people but zombie invasions start happening across the world and they close in on Fairview. The leaders of the city meet together and discuss their plan. The mayor orders everyone to welcome the zombies and give them fake brains, which works. The zombies end up liking the fake brains and the humans and zombies unite, living happy lives. However, aliens arrive. The new mayor (Tiffany Rottenflesh), a zombie, suggests that they welcome the aliens. However, the aliens destroy the humans and zombies, taking over Fairview.

When Rowley and Greg watch a scary movie at a sleepover, Greg gets possessed by a demon and starts wrecking things until Rowley sprinkles toilet water on Greg and Greg gets mad, and Robert and Linda Jefferson kick Greg out of the house. 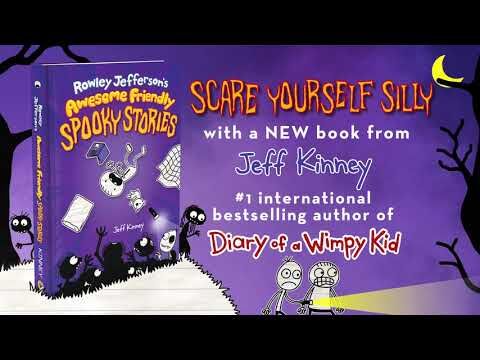 Retrieved from "https://diary-of-a-wimpy-kid.fandom.com/wiki/Rowley_Jefferson%27s_Awesome_Friendly_Spooky_Stories?oldid=165271"
Community content is available under CC-BY-SA unless otherwise noted.