“We can call ourselves the Diary Twins!”
―Rowley says to Greg after he gets a Diary on his birthday

Rowley's Diary was a "Sweet Secrets" Diary. At his birthday party in Rodrick Rules, he got a Diary from his parents, because he asked them for it. The main reason he asked for it was because Greg had a Diary and Rowley wanted to be like Greg. After receiving it, Rowley started recording Dinoblazer Action Figure matches in his diary. After teachers gave the kids a questionnaire paper to know what jobs they may get, Rowley got "Nurse" and started hanging out with other girls who also got "Nurse". Soon Greg wanted to know what was all the gossip, so he bought another Sweet Secrets Diary and at P.E. Rowley left his Diary on the benches, and Greg opened it with his new diary's key. However, he did not find any of the gossip, as Rowley recorded page-by-page of Dino Blazer Action Figure matches, making Greg wonder why he is friends with Rowley. 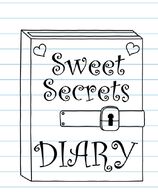 Rowley Jefferson's sweet secrets diary which he got on his birthday. 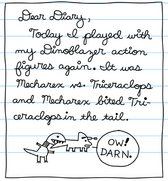 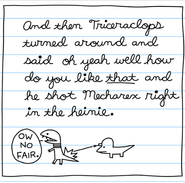 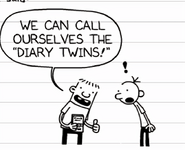 Getting his diary in the online book.

Getting his diary in Rodrick Rules.
Add a photo to this gallery
Retrieved from "https://diary-of-a-wimpy-kid.fandom.com/wiki/Rowley%27s_Diary?oldid=153190"
Community content is available under CC-BY-SA unless otherwise noted.