This article is an epic stub, which means it does not reach the criteria of this wiki's page length and information. You can help Diary of a Wimpy Kid Wiki by expanding it.

Rory is a fictional monkey in an allegory Greg Heffley writes for an English assignment, titled "Rory Screws Up". The story is inspired Greg seeing his brother Rodrick working on his van.

In the allegory, Rory lives with a family that loves him very much, even though he constantly screws things up. When Rory accidentally rings the doorbell, his owners reward him, believing the action was intentional. Believing himself to be some sort of monkey genius, Rory overhears his master complaining about his car and endeavors to fix it. Despite trying, he ultimately ends up making things worse and learns a lesson, which is that he is a monkey and monkeys don't fix cars. 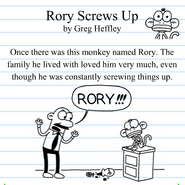 Page 1 of Rory Screws Up.

Page 3.
Add a photo to this gallery
Retrieved from "https://diary-of-a-wimpy-kid.fandom.com/wiki/Rory?oldid=148069"
Community content is available under CC-BY-SA unless otherwise noted.