Diary of a Wimpy Kid Wiki
Register
Don't have an account?
Sign In
Advertisement
in: Antagonists, Male Characters, Teenagers,
and 73 more
English

Rodrick Heffley is the aggressive older brother of Greg and Manny Heffley and the drummer and founder of the rock band Löded Diper. He is a major character in the Diary of a Wimpy Kid series, acting as a tertiary antagonist in the series overall and serving as the main antagonist of Rodrick Rules.

Rodrick Heffley was born to Susan and Frank Heffley in Plainview.

When Greg was little, Rodrick liked to mess with his head. The first lie he told Greg was that if your belly button got untied, your butt would fall off. Greg told his whole preschool class, which caused a big stir. Another lie was that the toilet seat was only used for girls. Greg believed this, until he accidentally left the door unlocked, and Susan found him. Once he told Greg that, if someone wears camouflage, they are invisible to everyone else. That incident got Greg banned from the pool for the rest of the summer. Sometimes Rodrick's lies even end up costing money. Greg once believed that, if you put money in the ground, it will grow into a money tree. Rodrick took the money, and Greg lost a lot of his birthday money until his mom stepped in to help him.

Rodrick Heffley attended Westmore Middle School and became friends with Chris and Ward and they together created the band Löded Diper. He also wrote an assignment called A Hundred Years Ago; this assignment was the reason Frank started to do his homework for him. He used to be a trouble maker in school and was greatly disliked by some of the teachers there, one known person being Mr. Huff. During this time Rodrick tried out soccer but quit because of Mr. Litch.

A summer later, Rodrick and his friends were going camping overnight looking for concert tickets; during that time they meet Bill Walter. Rodrick became friends with him and looked up to him, because in high school he was voted, "Most Likely To Be A Rock Star".

Like Greg, it is explained that Rodrick has no actual talents at all, is only good at a few things, mainly rock music, and spends most of his time on it, which drafts him away from schoolwork. He would much rather sleep for hours over doing anything else. Fitting with his love for heavy metal music, Rodrick is the lead drummer of a band called “Löded Diper”, a metal band. Its lead singer is a man whom Rodrick's parents are afraid he will become like: Bill Walter.

Rodrick is extremely lazy and careless when it comes to school, which explains where Greg gets his laziness. He almost never gets a grade above C-, except for his book reports, where however Frank does nearly all the work due to Rodrick's inability to type. Greg believes that Rodrick is lazy and unintelligent in all other areas, though there are clues that show otherwise. Rodrick clearly isn't the smartest of his family, since he hardly makes an effort at school and constantly asks his parents to do his work for him, as already mentioned. Sometimes he can even get rewarded for bad grades. When Greg was invited to a café by his parents as a reward for his great half-year report card with A's and B's on it, Rodrick was allowed to come too despite of his report card being as terrible as usual. Although Rodrick is portrayed in this manner, he is actually quite manipulative and intelligent in conning other people.

Rodrick is said by Greg to be a terrible speller (though he spelled everything right besides band names on his activity page in The Wimpy Kid Do-It-Yourself Book) and is said to be completely ignorant about how to use any electronic device (although this may be more manipulation to get things done for him; he is clearly seen using a music player in Rodrick Rules and a cell phone in a flashback in Dog Days, and in The Ugly Truth it is shown that he uploads photos online and he is again seen using a music player once again in Hard Luck. He also messages his friends inThe Deep End). Rodrick did terribly back in elementary and middle school. He also thinks you can get bacon from pigs the same way eggs come from chickens.

The only reason Rodrick is doing slightly better at high school is that he cheats by having his dad do all the work for him, but in Hard Luck, it is said his first quarter didn't go well, meaning that his father might have stopped helping him. In the online book, Rodrick gets into a big fight with his dad in seventh grade, so he had to do a history paper himself. Greg buys that paper and flunks it. He is shown to misspell a lot of words even in the recent books, like for example, in Dog Days and the online book, when they got Sweetie (the dog), Rodrick went and got the dog a bowl that says "Sweaty". In The Long Haul, he thought a safe is a microwave and bacon comes from pigs in the same way that eggs from chickens.

Even though Rodrick is often lazy, mean, careless, and irresponsible, he is shown to have a softer side at times, as seen where he can occasionally treat Greg nicely and the brothers get along. They also do some stuff together.

In the most recent books, he tends to be more responsible and treats his family nicely with respect. 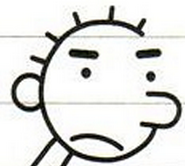 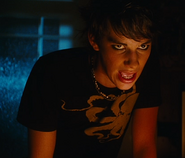 Rodrick in the movie version

Rodrick as a baby

Rodrick as a child with his family.

Rodrick playing a prank on Greg

Rodrick Rules, a book in which Rodrick plays a major part 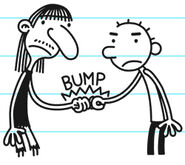 Rodrick is smiling to his mother, Susan Heffley, for having a new baby named Manny.

In the Poptropica Dog Days ad.

In the Poptropica Long Haul ad.

Rodrick as a toddler

Rodrick and his Girlfriend

Rodrick in Diary of an Awesome Friendly Kid

Rodrick "waking up" Greg, turns out it was a trick.

Rodrick as a child with his family. (cropped)