“We were about to call the police.”
―Robert gets angry at Rowley and Greg.

Robert Jefferson is the father of Rowley Jefferson, the husband of Mrs. Jefferson, the brother of Rowley's Uncle and son of Grandpa Jefferson. He appears as a minor antagonist. He is one of the wealthiest people in Surrey Street, as well as the least respected in his neighborhood. In the movie, he is played by the late Alf Humphreys. He has an on-and-off hatred towards Greg because he sometimes believes he was a bad influence on Rowley.

He is an extremely overprotective but well-intentioned parent and will not let Rowley play any video games with the slightest bit of violence or fighting in it, as he sees them as things that could change Rowley into a different person. In Old School, he is seen hollering at Rowley to put a stick down. He will not even let Rowley use the internet. He does not like criticism from people as seen in Dog Days. It's also implied that he also has a tendency to jump to conclusions often similar to Greg's dad Frank. He thinks that Greg is a bad influence on Rowley, and he, in Dog Days, also banned Rowley from seeing Greg for a whole Summer. Even though he keeps telling Rowley to stay away from Greg. He and his wife later hired a Cool Brian for Rowley after he broke up with Greg.

Greg depicts Mr.Jefferson with afro style hair, black shirt, and long pants. In Dog Days, it is shown that he wears pajamas when he is sleeping. He returned in the film version of Rodrick Rulesbut has no dialogue. He only appears to pick up Rowley after Rowley had sat on the tin-foil ball covered with toothpicks that Manny made for Greg as a apology gift and after Rowley freaked out from watching the movie The Foot and Greg was forced to apologize to Tommy for choosing an "inappropriate" movie.

He is shown to have dark grey hair as seen in the movie, but in Wimpy Kid Boardwalk island in Poptropica had shown he has blonde hair, just like his son Growley and his wife Lydia. He wears a lavender shirt, black shorts, and brown shoes. 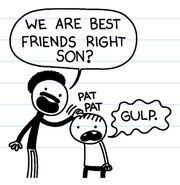 Robert Jefferson in Diary of an Awesome Friendly Kid.

Add a photo to this gallery
Retrieved from "https://diary-of-a-wimpy-kid.fandom.com/wiki/Robert_Jefferson?oldid=167408"
Community content is available under CC-BY-SA unless otherwise noted.