The Reading Is Fun Club is a club that Susan Heffley started in Diary of a Wimpy Kid: Dog Days. Its creation was sparked when Greg was caught having watched a horror film with Rowley during their sleepover. She lectures Greg about how this generation doesn’t know “what real entertainment is”. She then founds the club, and some of the boys in their neighborhood join. Greg begged his mom to give him a regular punishment instead but she didn't budge.

In the movie adaptation, Rowley, Chirag, and Greg are the only members.

The club included six known members at its start, the only two notable members being Greg and Rowley. As Greg stated, club membership “took a big hit overnight”. By the next day, the only members were Greg and Rowley. By Friday of that week, Rowley has abandoned the club and it became only Greg as a member. The club was eventually dissolved when Rowley's father informed Susan of the debt Greg brought him through the country club.

All the members at Reading Is Fun club.

Susan is waiting for Greg to finish Charlottes web. 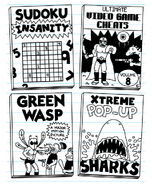 All the books the members brought to the club. 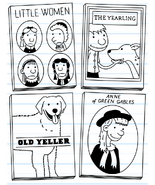 Books brought by Susan from then she was a kid and wants the members to read classics.

The books Rowley Jefferson brought on the second day in the club.

Greg brought his Shadowdoom book on the second day of the club.

The Charlotte's Web book assigned to Greg from Susan in the Reading Is Fun club.

The photo of all the members in the reading is fun club.
Add a photo to this gallery
Retrieved from "https://diary-of-a-wimpy-kid.fandom.com/wiki/Reading_Is_Fun?oldid=167450"
Community content is available under CC-BY-SA unless otherwise noted.