Peyton Roi List was born on April 6th, 1998 in Florida, United States. She is a child actress and child model. List is best known for her role of Emma Ross on Jessie, the ABC show Cashmere Mafia where she played Frances O'Connors onscreen daughter, Sasha Burden and from the movie 27 Dresses where she played the younger version of Katherine Heigls character Jane. In the Diary of a Wimpy Kid: Rodrick Rules film she is the actor of Holly Hills, who is a love interest of Greg Heffley. She also appeared in Diary of a Wimpy Kid: Dog Days.

Peyton was the first one to do modeling. She got inspired in it when her mother was modeling. Then her brother Spencer did what Peyton did. When Phoenix was a baby he modeled also. List appeared alongside Robert Pattinson in the movie "Remember Me as a Girl" who bullies her character's little sister. In 2010, List appeared in the Disney film The Sorcerer's Apprentice, and in Lifetime Movie Network's Secrets in the Walls, alongside Jeri Ryan and Kay Panabaker. List began modeling at a late age, both alone and with her brother Spencer. She has appeared in over 400 commercial advertisements in various formats for various companies. 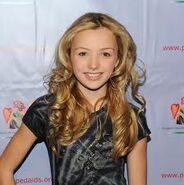 Retrieved from "https://diary-of-a-wimpy-kid.fandom.com/wiki/Peyton_Roi_List?oldid=160966"
Community content is available under CC-BY-SA unless otherwise noted.