Diary of a Wimpy Kid Wiki
Register
Don't have an account?
Sign In
Advertisement
in: Characters, Cabin Fever characters, Male characters,
and 17 more

Diary of a Wimpy Kid (online)

Nasty Pants is a minor antagonist in the Diary of a Wimpy Kid series who used to bully Greg Heffley and Rowley Jefferson when they were going through his neighborhood. He appears in Cabin Fever and Wrecking Ball.

Nasty Pants regularly chases Greg and Rowley with a stick when they go through his neighborhood on the way to school. This harassment continues to the point that they start taking a long route to escape his bullying. When they tell Vice Principal Roy about it, he said he can't help because Nasty doesn't go to their school. Greg complains to Frank Heffley, who tells him the story of how he confronted his own bully. Though he doesn't think he would be any match against Nasty Pants, Greg thinks that confrontation is a good idea and enlists the help of Rowley and his father, and they go to Nasty Pants's house together.

When Nasty Pants himself answers the door, Greg and Rowley make a run for it, though the adults are confused and don't realize that the boy is Nasty Pants at first. Nasty Pants' mother explains that he is only five years old and that he sometimes gets wound up a little. On the way home, Frank becomes mad at his son for getting bullied by a kindergartner, though Greg defends himself by saying that when someone chases you with a stick, you don't stop and ask how old they are.

Nasty Pants is seen at the Heffleys' moving away party.

Nasty Pants chasing Greg and Rowley with a stick

Nasty Pants at the door as he terrorizes Greg and Rowley, making two of them run

Nasty Pants and his mother 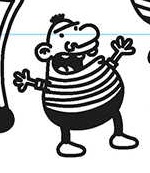