Mrs. Rutkowski's Cats are minor characters who appear in Diary of a Wimpy Kid: Wrecking Ball. They are a group of five (or more) cats who belong to Mrs. Rutkowski.

When the Heffley Family was getting house renovations, one of the cats stepped on a nail in their garden and Mrs. Rutkowski gave the vet bill to Frank Heffley. 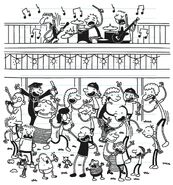 One of the cats can be seen dancing near Susan and Rowley
Add a photo to this gallery
Retrieved from "https://diary-of-a-wimpy-kid.fandom.com/wiki/Mrs._Rutkowski%27s_Cats?oldid=163478"
Community content is available under CC-BY-SA unless otherwise noted.