Mrs. Graziano, who is the school's music teacher, made her first appearance in Old School, and her latest appearance in Double Down. She goes to Hardscrabble Farms on the schools field trip, and states that she has been going on the trip for 19 years. She appeared to be the head of the field trip since she told the kids the rules, and had the chaperons to search kids bags. Greg and his cabin-mates accidentally swiped her bag when they raid the girls' cabin during the trip.

In Double Down, she is shown to be the schools music teacher. Greg states the band sounds not all that great, and that Mrs. Graziano is likely annoyed by the band as she has been the music teacher for 30 years. It is stated she is planning to retire the next year, and that she has already given up on the band due to this. She apparently hates farts, as shown when Grayden Bundy is blamed for Greg’s fart noise while playing his French Horn.

Emilio gropes a tree in the dark as Mrs. Graziano finds him. 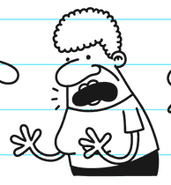 Mrs Graziano is annoyed by probably bad, and definitely loud music from students in her music class probably because she has worked at the school for a long time.

Mrs. Graziano playing computer while her students playing instruments to warn up as she was retiring soon.

Mrs. Graziano lets Grayden Bundy leave as a punishment during the school band rehearsal.
Add a photo to this gallery
Retrieved from "https://diary-of-a-wimpy-kid.fandom.com/wiki/Mrs._Graziano?oldid=134158"
Community content is available under CC-BY-SA unless otherwise noted.