Mrs. Craig is a teacher in the Diary of a Wimpy Kid series. She first appears in the first book, and makes another appearance in the third book.

Mrs. Craig catches Greg Heffley and Rowley Jefferson in the back of the school with a personal music player during recess. She takes it away and chews them out, telling them that rock and roll music is "evil" and would ruin their brains. When she is about to let them go, Rowley breaks down and starts blubbering about how how he doesn't want rock and roll music to ruin his brains.

It is not known whether or not the music player was returned to them.

She returns in The Last Straw where she thinks someone stole her dictionary and leaves Patty in charge and the next day, Patty is sick and puts Alex Aruda in charge. It turns out he took her dictionary to learn words for a state spelling bee and Corey Lamb, who put the dictionary on the table was mistaken as the thief when she walked in the room. 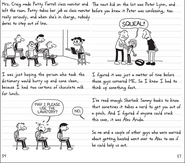 Mrs. Craig's line if someone asks to go to the lavatory: "No."
Add a photo to this gallery
Retrieved from "https://diary-of-a-wimpy-kid.fandom.com/wiki/Mrs._Craig?oldid=138932"
Community content is available under CC-BY-SA unless otherwise noted.