Mr. Underwood is Greg's Physical Education teacher. He has a very little role in the first book, teaching the students a wrestling unit. His role in The Last Straw was a minor but important appearance, where he was walking with the principal Mrs. Mancy to mark the students' dancing abilities as 20% of their P.E. grades. In Cabin Fever, he was also shown during a push-up test. In The Third Wheel, he is shown being bitten by Ruby Bird. In the film, he is known as Coach Malone. 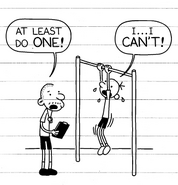 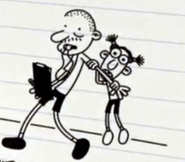 Ruby Bird about to bite him.

Mr. Underwood recording the grades for the Presidential Fitness Test as the kids are still struggling to do sit-ups.

The girls telling Mr.Underwood that they are unhappy with their kind of push-ups

Mr. Underwood recording the P.E. grades during the push-ups test as the girls doing a regular push-ups instead of easier push-ups after they signed the petition.

Mr. Underwood seeing Greg with the "fake proof" that he did exercises.

Mr. Underwood sees the boys as terrible makeup artists like as Greg.
Add a photo to this gallery
Retrieved from "https://diary-of-a-wimpy-kid.fandom.com/wiki/Mr._Underwood?oldid=138203"
Community content is available under CC-BY-SA unless otherwise noted.