Mr. Morsels is a minor item in Diary of a Wimpy Kid: The Meltdown.

Appearance in the Book

When Greg was 8, Susan tried to make him eat peas by buying Mr. Morsels, a hand puppet that apparently likes peas. However, it backfired when Greg used Mr. Morsels to get rid of all his peas. In Diary of a Wimpy Kid: The Meltdown, Greg loses a glove. Since he was already late to school, he found the closest thing to a glove; Mr. Morsels. Later on in the book, Greg snags Mr. Morsels on an abandoned truck in the Mingo Kids Headquarters. He later abandons it.

Later during the Surrey Street Snowball Fight, the Mingo Kids show up. Meckley Mingo has put Mr. Morsels on a stick as a tribe symbol. 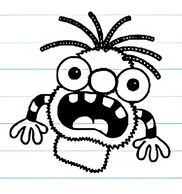 Mr. Morsels on a stick as Meckley Mingo is holding on for the snowball fight.
Add a photo to this gallery
Retrieved from "https://diary-of-a-wimpy-kid.fandom.com/wiki/Mr._Morsels?oldid=138868"
Community content is available under CC-BY-SA unless otherwise noted.