Meckley Mingo is one of the Mingo kids, as well as being the leader. He is a minor antagonist in the 8th book, Hard Luck and the 13th book, The Meltdown.

Meckley, as described by Greg, "always wears a tank top and a belt with a metal buckle." His stature is noticed while he is chasing Greg and Rowley, he appears to be quite tall and looks overweight.

Not much is known about Meckley, but he is most likely cruel and short-tempered.

Meckley is mentioned when Greg talks about the Mingo Kids and how Meckley is their leader. Once when Greg and Rowley stepped near Mingo Kid territory, one of the Mingos threatened them both, also mentioning Meckley. In order to avoid being chased by Meckley and the other Mingo Kids, Greg thinks about joining some after school clubs. At the end of Hard Luck, He's shown chasing Greg Heffley and Rowley Jefferson.

He also makes an appearance at the climax of The Meltdown. Meckley is shown at the end of the book, chasing Greg and Rowley. During the Battle of Surrey Street, the Mingo Kids join in and Meckley is among them, looking for his belt buckle (which Greg accidentally took when he and Rowley went into the Mingos' camp). During the battle, the snow plough comes through. Meckley and the Mingo Kids go back to their camp. 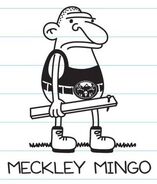 Meckley Mingo and a member of the Mingo Kids chasing Greg and Rowley.

Greg shocked to see Meckley Mingo's belt buckle when he picked up his belt buckle, meant Greg and Rowley had sneaked into Mingo Kids' headquarters camp.

Meckley Mingo holding Mr. Morsels on a stick as a tribe symbol after taking a three-month nap.

Greg shocked to see Meckley Mingo's belt buckle after take it out from his coat pocket, not realizing his belt buckle is still with him after he sneaked it inside his pocket.
Add a photo to this gallery

Retrieved from "https://diary-of-a-wimpy-kid.fandom.com/wiki/Meckley_Mingo?oldid=165025"
Community content is available under CC-BY-SA unless otherwise noted.