Li'l Cutie is a comic strip in the local newspaper Greg and his family reads. Greg and his dad hate it very much.

In Dog Days, the creator of the comic strip, Bob Post ended it in August, but his son Tyler Post who is 32 and still lives with him continued it. The comics were based on Tyler Post when he was young. Rowley loves these comics a lot. Rodrick knows Greg's hatred to these comics and buys him books with collections of the Li'l Cutie comics like "The Best of Li'l Cutie" and gives it to him every Christmas. One year, Greg gives his book to Rowley for Christmas, and Greg receives a Big Wheel. The comic is basically about a little kid who keeps asking his dad and sometimes his mom stupid questions. It was mentioned in The Ugly Truth. In the online version it is mentioned that the editors try to cancel Li'l Cutie, but a gang of old ladies threaten to cancel their subscription if they didn't bring it back, so It stayed.

The earth must get sore from being stepped on all day

Too bad God didn't fill the ocean with chocolate milkshake 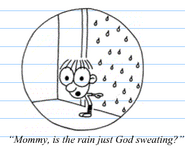 L'il Cutie in the online version.

Mommy, did my pencil go to heaven? 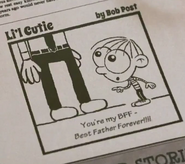 Announcement in the movie that comic is continuing

Announcement in the books
Add a photo to this gallery

Retrieved from "https://diary-of-a-wimpy-kid.fandom.com/wiki/Li%27l_Cutie?oldid=161462"
Community content is available under CC-BY-SA unless otherwise noted.