“I've been going to Spag Union Prep School. They really turned me around. You may remember I was a bit of a troublemaker.”
―-Lenwood to Frank at the public town pool

Lenwood Heath is a delinquent teenager who was shipped off to a military school during The Last Straw and the Dog Days movie. His positive transformation after going there inspires Frank Heffley to try to send his son Greg there as well.

Initially, Lenwood was an extremely delinquent person with long hair. He was described by Greg as the baddest teenager in his neighborhood and was sort of like Frank's archenemy. Eventually, his parents send him off to a military academy called Spag Union.

At Spag Union, Lenwood is shaped into a more respectable person over the next few months. He gets a crew cut haircut and starts trying to get good grades at Spag Union so that he can get into West Point. Lenwood returns to his hometown over spring break and works at a local movie theater.

When Frank, Greg, and Rodrick Heffley visit the movie theater one night, Frank recognizes him immediately, though Greg doesn't realize who he is until he looks at his name tag. Frank and Lenwood begin a long conversation where they discuss Lenwood's current situation and his enrollment at Spag Union, and Greg and Rodrick enter the theater and get refreshments. Frank spends the rest of the night in a good mood.

As a result of his conversation with Lenwood, Frank decides to send Greg to Spag Union, though he ultimately relents right before he is to be shipped out.

Lenwood is seen working as a lifeguard at the city pool. When Greg sees his dad's reaction to Lenwood's change in behavior due to him attending a military school, he gets worried that his dad would get the idea to send him to the same military school that Lenwood's parents sent him to.

Before and after of Lenwood Heath. 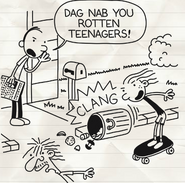 An illustration of Lenwood Heath in the movie. 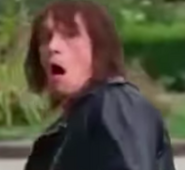 Lenwood in the Dog Days movie (pre-Spag Union).
Add a photo to this gallery
Retrieved from "https://diary-of-a-wimpy-kid.fandom.com/wiki/Lenwood_Heath?oldid=167017"
Community content is available under CC-BY-SA unless otherwise noted.