Laurel Stringer is a girl who goes to church with Greg. She is also one of Greg's love interests and she only appeared in The Third Wheel. Her brother is Wesley Stringer.

In Diary of a Wimpy Kid: The Third Wheel, Greg Heffley tries to become friends with Laurel so that he can eventually be her partner at the school dance. Her family comes over for dinner one night, and Mrs. Stringer asks Greg if he could babysit Laurel's brother, Wesley . He agrees, but gets locked out of the house by Wesley who destroys the Stringer's house by riding his bike inside. Eventually, he manages to get back in, but lands inside Laurel's bedroom and takes a nap in her bed. He is presumably fired when the Stringers get home.

Greg hopes that all of them will have a good laugh about it down the road, but Mr. Stringer won't forgive him for quite awhile.

Laurel Stringer, pictured in the middle during church. 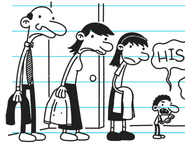 Laurel and her family arrive at Heffley's house for dinner.

Greg doesn't want to look unsophisticated in front of Laurel Stringer during dinner when eating asparagus.

Laurel with Greg as he offers to babysit Wesley.

Greg imagines a reality where he is older, married to Laurel, and having a laugh about when he used to babysit Laurel's brother Wesley.

The Stringer family comes home to find Greg sleeping in Laurel's bed.
Add a photo to this gallery

Retrieved from "https://diary-of-a-wimpy-kid.fandom.com/wiki/Laurel_Stringer?oldid=119929"
Community content is available under CC-BY-SA unless otherwise noted.