Latricia Hooks lives on Upper Surrey Street and in the one-story house across from the duplex. She is six-foot-two high school junior. Rodrick won't go anywhere near her because Latricia used to bully him when he was Greg's age. She has a sister named Victoria Hooks. During the snowball fight she was punching Speed Bump in the face. During the war at the end she is seen punching a person in the face. She appears in Wrecking Ball as a cameo when dancing with the Heffley Family and neighbours. 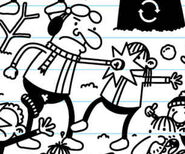 Latricia Hooks punches someone in the Battle of Surrey Street.

Retrieved from "https://diary-of-a-wimpy-kid.fandom.com/wiki/Latricia_Hooks?oldid=147750"
Community content is available under CC-BY-SA unless otherwise noted.