This article is considered to be a stub. You can help the Diary of a Wimpy Kid Wiki by expanding it.

Igdoof was a comic Jeff Kinney made for the University of Maryland's campus newspaper. It was super popular in college, however, when Kinney tried to get it in some newspapers after he had graduated from college, he got rejected multiple times. As a result, he decided he would try to make a book, which became Diary of a Wimpy Kid. He first published the book idea on Funbrain, in the Diary of a Wimpy Kid (online version) (which can still be read on Funbrain today) to see if people would like it or not Diary of a Wimpy Kid, which was successful. As a result, Jeff Kinney searched for a book publisher, which he found at New York Comic-Con when he met Charles Kochman, and it later became a printed book. [1]

Greg in an Igdoof Comic.

Ugly Eugene & Gareth The Green Bean in an Igdoof comic. 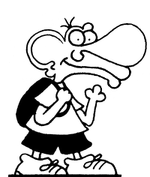 Retrieved from "https://diary-of-a-wimpy-kid.fandom.com/wiki/Igdoof?oldid=167513"
Community content is available under CC-BY-SA unless otherwise noted.