Heather Hills (Lori Matthews in the online version) is a supporting character in the book Diary of a Wimpy Kid: Dog Days, and the main antagonist in the the film of the same name. She is a teenage girl in Rodrick Heffley’s grade and the older sister of Holly Hills.

In the books, not much is known about Heather's personality, since she makes too little appearances. Given that she was Rowley's babysitter, it may possibly serve as a hint that she could actually be nicer than her film counterpart.

In the film, as the main antagonist, her personality is shown to be that of the ultimate stereotypical valley girl. She is extremely ignorant, rude, spoiled, narcissistic, selfish, ill-mannered, self-absorbed, lazy, entitled, mean-spirited, cold-hearted, obnoxious and brash. Although Holly and Greg both describe her as the female-equivalent of Rodrick, she is shown to be far more ill-mannered, obnoxious, and mean-spirited than him, seeing everyone else as beneath her and caring about absolutely nobody but herself, not even her own family, and shows no remorse or regret for her actions. In addition, her actions tend to be extremely reckless, as she once threatened to leave Holly behind at the club, and tried assaulting Rodrick when he accidently knocked over her sculpture of her.

Heather has a close resemblance to her sister Holly Hills. Heather has long hair and wears pitch black earrings in both of her ears. In the film, she is also blonde like Holly.

In Rodrick Rules, Heather babysits Rowley Jefferson while his parents were gone. Greg Heffley harbors a crush on her. Whenever Rowley's parents go out, Greg would go to Rowley's house at 8:00 PM and one night splash on Rodrick's cologne to make sure he makes a good impression on her. She was later replaced by Leland, which surprised Greg and started complaining how his parents needed to keep Heather. Also, she appears in Rodrick's old yearbook.

In Dog Days, Greg has a crush on Heather and Holly Hills. He thinks of getting good with her because he wants to have a high school girlfriend before school starts. He finds out she is a lifeguard at the pool by looking into one of the family's summer albums. When the family goes to the pool, Greg goes to the bathroom and starts doing push-ups and other exercises so his muscles pop up. Then after that, he goes near her chair. Whenever a kid does something bad, Greg spoke up before Heather could say anything, thinking it will impress her. The other day when Greg came there, he went near her chair and asked Susan Heffley to take a picture of him there. Susan was about to take the picture, but she got a phone call from an old friend. By the time she takes the photo, Heather left, so Greg ended having the photo taken with another Lifeguard. Greg then realized she is going to college, thinking long-term relationships don't work, so he scrapped his plan of getting good with her. One day, a kid vomited and Greg didn't clean up, which was the only time when she paid attention to Greg because she was expecting him to say it.

Heather is briefly mentioned in Diary of a Wimpy Kid: Rodrick Rules (film) and seen at Plainview's Most Talented lauging alone with the crowd. She is described by Holly Hills as a female equivalent of Rodrick Heffley, possibly like how Greg is possibly Holly's male counterpart. As Heather is a valley girl, she has first-world issues, and doesn't care about anything but herself, as shown in Diary of a Wimpy Kid: Dog Days (film) where she says for Holly to get in the car and says she doesn't care if Holly is signing Greg's yearbook.

She later appears in the third film as a love interest of Rodrick and one of the main antagonists, acting like a bigger jerk than Rodrick, being a stereotypical self centered teenage girl. She first shows up to pick Holly from school, and when Rodrick tries to flirt with her, she runs over his foot. She naturally goes to the same Country Club as her family, getting a job there as a lifeguard. She acts rude to almost everyone, including her own parents, only thinking about her upcoming sweet sixteen and even ignores Rodrick, when he pretends to drown to get her attention. Greg manages to get her to hire Loded Diper for her birthday. While there, it falls into ruins when she angrily reacts to Rodrick's rock cover of Justin Bieber's "Baby." Just then, Rodrick accidentally knocks down the ice sculpture, which causes her to get angry and tries to hit Rodrick. But, he ducks down and Heather hits the chocolate fountain, which causes it to spray all over Heather and Madison. All the guests left her party. Greg apologized to Holly, but she said she was happy and that she thought that Heather fairly deserved it.

Role in the Online version 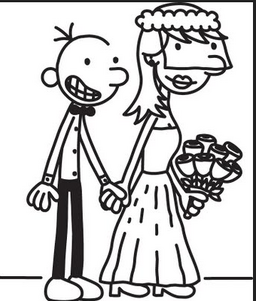 Greg getting married to Heather Hills (in Greg's mind).

Online version of Heather (Lori) getting caught by the Jeffersons smoking after Rowley went to bed and was fired from her babysitting job. 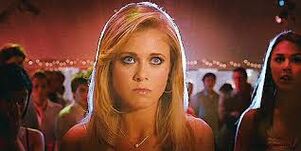 Heather getting angry at Rodrick for his awful performance. 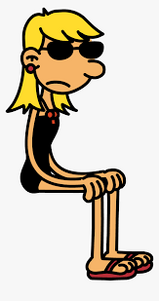 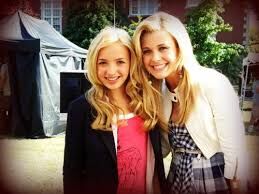 Heather in the movie.

Retrieved from "https://diary-of-a-wimpy-kid.fandom.com/wiki/Heather_Hills?oldid=167770"
Community content is available under CC-BY-SA unless otherwise noted.