Hardscrabble Farms is the place Greg and his school go on a week-long field trip in the 10th book "Old School". It is the main location of the 10th book. The camp is known to make kids miserable, and even traumatize some, like what happened to Rodrick when he went. The main cause may be the rumored Silas Scratch who supposedly lives near the farm in the woods after supposedly being kicked off his land he had while working at the farm. Silas Scratch turned out to have been a hoax, created by Greg's dad, Frank, to keep people away from a maintenance shack, which contained nicer things than much of the rest of the farm, which he found in the woods while gathering firewood at the place when he was a kid.

People who went on the schools trip/work there

Went on the trip:

Greg picks up the remains of the book The Essential Book For Young Lads after his group got desperate to find things that would burn, to keep the fire going. 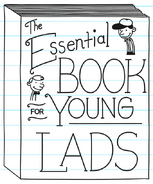 The cover of the book, The Essential Book For Young Lads.

Greg spies on a group that has a few Boy Scouts in it because the group is doing really well as one of the Boy Scout group members points at Greg. 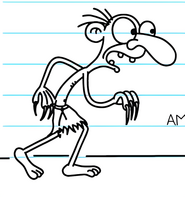 Albert Sandy talks about Silas Scratch and how he supposedly uses underground tunnels, and that is why he is able to get around so quickly, which scared some people, causing them to decide not to use the bathrooms for the rest of the trip, which was only on day 2 at the time.

The sign for Hardscrabble Farms with the motto: Old-Fashioned values for today's youths.

Greg and his cabin mates struggling to do the obstacle course made of ropes tied to each other.

Greg, using The Essential Book For Young Lads to instruct his group to build a waterproof lean-to shelter.

The Nurse couldn't pull Gareth's tooth out of Rowley's head.

The actual Hardscrabble Farms
Add a photo to this gallery
Retrieved from "https://diary-of-a-wimpy-kid.fandom.com/wiki/Hardscrabble_Farms?oldid=133498"
Community content is available under CC-BY-SA unless otherwise noted.