Diary of a Wimpy Kid Wiki
Register
Don't have an account?
Sign In
Advertisement
in: Stubs, Locations, Places,
and 8 more

Diary of a Wimpy Kid (online)

Greg and Rowley came up with awesome ideas, by which they could illustrate and make it look like what is is supposed to be. Unfortunately, they only had 30 minutes to do it, so the whole thing turned out to be a total typo for the children who came. Also Shane Snella got frightened of the Hall of Screams and hid in the middle. Just then, Rowley's dad came down the stairs into the basement. Greg thought he could help them, but Greg was wrong, because he mentioned the haunted house and he made all the children leave. Luckily, Greg and Rowley still had their $2 because Robert Jefferson did not believe the scary pranks on kids was part of their haunted house. 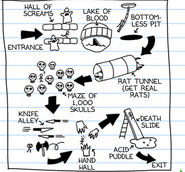 The plan in the online version.

the plan in the first book
Community content is available under CC-BY-SA unless otherwise noted.
Advertisement