"Okay, first of all, let me get something straight. This is a journal, not a diary. Yeah, I know what it says on the cover, but when my mom went out to buy this thing, I specifically told her not to buy one that said "diary" on it. This just proves Mom doesn't understand anything about kids my age. The only reason I agreed to write in this thing is because when I'm rich and famous I'll have better things to do than answer people's stupid questions all day long. Mom got me this thing so I could write down my feelings about starting middle school. But I'm gonna be fine."
Greg Heffley

Gregory "Greg" Heffley is an American middle school student and also the main protagonist of the book series Diary of a Wimpy Kid and the main antagonist of Diary of an Awesome Friendly Kid. Greg is also the most important character in the whole series.

According to Jeff Kinney, he is based on his own worst qualities in middle school. Greg is very concerned about his popularity level and how he looks in public. He absolutely loves video games, comics, and slacking off, taking after his older brother, Rodrick Heffley. He takes up a lot of traits from Rodrick (such as selfishness, laziness, etc.). He also has an interest in cartooning and making comics. He was played by Zachary Gordon in the live-action movie trilogy and by Jason Drucker in the The Long Haul reboot film. after Zach Gordon's and many other actors' puberty

Although he claims he isn't, Greg is lazy, sociopathic, petty, narcissistic, cowardly, egotistical, eccentric, usually backstabbing, selfish, dishonest, and apparently lacks real human integrity. He hardly has any talents or skills aside from video games and possibly singing. However, despite all this, Greg still has had his kind and caring moments, just not that often. He hates taking the blame for anything, and would much rather take all the credit for his friends’ hard work than do anything for himself.

Greg explains and narrates throughout the series that he has no strong talents, other than video games and comics. As such, he spends most of his time on them, which deters him away from schoolwork and chores. For a time, he harbored a hope of drawing for the school newspaper, but his comic was bowdlerized by the editor (Mr. Ira) and Rowley’s comic, which was also Greg's idea, was better liked by the people at his school. He hardly shows any other talents. However, Greg is probably good at singing, due to the fact that when he was auditioning for the school play, the drama teacher told him he had a nice soprano voice and is also good at sewing, but he complains that these talents do not make him stand out.

Greg almost always tries to find a scapegoat to put the blame on for his behavior, but he is oblivious to the fact that nobody forced or influenced him, other than probably his older brother, Rodrick, to act in this manner. Very few times has Greg actually admitted to being "wrong" in a decision he made and took responsibility for it. It should also be noted that while Greg is arguably a watered-down version of Rodrick, he does not have any productive interests and could actually be considered more hurtful than Rodrick psychologically.

Although he's considered a "wimp", he has a problematic behavior in many cases, and he often puts himself and his family into trouble. Typically he is looking to find a scapegoat to blame, and only on very rare occasions does he admits being "wrong", but he also seems to care for others and, as such, is willing to give himself to people he loves, especially Rodrick. The parents of his best friend, Rowley, believe Greg is a bad influence on their son (mainly Rowley's dad) because he sometimes gets bad grades in school, does not focus on his studies like he's supposed to, bullies their son constantly, and barely listens to his parents.

Greg wants to be famous when he grows up and imagines it many times. He is very petty in order to win.

Greg always has an exaggerated and narcissistic thought, being confident of being rich and famous. He also manipulates Rowley much more than needed, as he often thinks of hurting him and makes him do a lot of his work, like giving him piggy-rides, looking out for dog-poop, and completing Greg's English work since Greg is not good at writing in cursive, though Greg believes that he is doing it for a good cause. Although Greg is shown not to be hostile towards Rowley, in Diary of an Awesome, Friendly Kid, Greg can be seen shouting at Rowley for trying out his retainer. He also believes that his life is a secret television series and has done many ridiculous things to please his "audience" such as talking into the mirror and coming up with a ridiculous catchphrase ("Bite My Biscuits"). He also treated Manny's birth was great disdain since he knows that new characters such as little kids or babies are brought into the show to keep the rating good in the final season.

He also had a huge crush on Holly Hills, when she turned up at the seventh graders' roller rink (Rodrick Rules film). Holly Hills was a new seventh-grader at Westmore Middle School whom he fell deeply in love with. In the film adaptations of Rodrick Rules and Dog Days, he put in so much effort to win Holly all to himself, which was what Rodrick was reading out loud from Greg's diary in the film Rodrick Rules. After Holly's sister Heather's Sweet Sixteen party in the film Dog Days, Holly took Greg's hand, indicating she liked him back and she thinks he is really amusing. However, in the books, Greg lost interest in Holly after she mistook him for Fregley.

Greg is usually depicted with black shorts, or black pants (sometimes black jeans, or, when he is fantasizing, a black tuxedo) and a white shirt. He is very skinny and does not seem to eat nor work out much. His father has tried to get him to work out and exercise, but he prefers playing video games. His nose is a simple oval but stops where the first eye is while his ears are circled. His head is a circle that stops around his left eye. He also appears to wear contact lenses, which he mentioned in The Last Straw. He wears his backup glasses when he runs out of them. Greg also has a retainer as mentioned in Diary of an Awesome, Friendly Kid and a headgear as shown in The Ugly Truth. He also wears white shoes or black sandals (as shown in "Dog Days")

In the movies, he has brown hair and pale white skin. Like in the book, he's visually skinny and slightly shorter than Rowley. 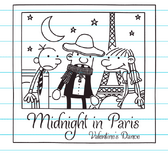 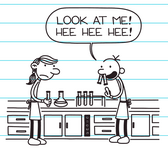 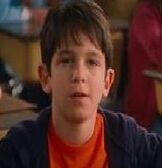 Crying Newborn Greg
Add a photo to this gallery

NOTE: This link redirects to the official Wimpy Kid website.
Retrieved from "https://diary-of-a-wimpy-kid.fandom.com/wiki/Greg_Heffley?oldid=137029"
Community content is available under CC-BY-SA unless otherwise noted.