He made a cameo appearance in Rodrick Rules in which Rowley's family celebrated his birthday and Greg was invited to. He is unhappy with the flavour of the cake and says that he wants chocolate cake for his next year's birthday, but Greg says that it would only be possible if he is alive the next year. This angers Robert Jefferson. He doesn't appear in the movie, as his scene is replaced by Greg's own Grandfather.

In Diary of an Awesome Friendly Kid it is confirmed that he had passed away, Rowley mentions he has an old log cabin (which is now owned by his dad) and calls his grandpa by Bampy, since he couldn't say grandpa. Bampy was also the only thing he could really say before his death due to severe dementia or alzheimers. 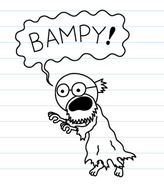 Grandpa Jefferson in Rowley's Adventure book
Add a photo to this gallery
Retrieved from "https://diary-of-a-wimpy-kid.fandom.com/wiki/Grandpa_Jefferson?oldid=163492"
Community content is available under CC-BY-SA unless otherwise noted.