Diary of a Wimpy Kid Wiki
Register
Don't have an account?
Sign In
Advertisement
in: Articles marked for cleanup, Female Characters, Senior Citizens,
and 37 more

Gramma is the maternal grandmother of Greg, Rodrick and Manny Heffley and their twin cousins Malvin and Malcolm, the mother of Susan Heffley, Aunt Cakey, Aunt Veronica, Aunt Audra and Aunt Gretchen, the sister of Great Aunt Martha and Great Aunt Beatrice, and the daughter of Meemaw and Peepaw. She tends to favor Manny, but she denies this. According to Greg in Diary of a Wimpy Kid Online, she has many photos of Manny and only has one of Greg’s head from the back and none of Rodrick. She was married to Grampa, whom she is a widow of.

Gramma first appears during Halloween where Rowley Jefferson uses the bathroom. Greg and Rowley hide in her house after being chased by the teenagers, but are forced to head back home by Susan because it's a school night. On the bus drive to school, Greg feels sort of bad that the teenagers had teepeed and egged her house, but rebuffs his guilt by stating Gramma is retired and probably didn't have anything to do.

As a way for Greg and Rodrick to earn Mom Bucks, Susan has the boys rake Gramma's leaves. Due to Rodrick's advice of tying the bag from the bottom, Gramma is not happy to hand over her hot chocolate stating they hadn't raked any of her leaves properly, but had to, as she made a deal that if they rake, she will give them hot chocolate. Manny is dropped off at Gramma's house while his parents go on vacation, because she favors him which she repeatedly denies stating that she "loves all her grandchildren equally".

When Greg was in trouble with his parents, he invited Gramma over for dinner because Frank doesn't get mad when Gramma is there. Greg later comes to her bingo.

It is shown that she had a dog named Henry, and after his death she started reading tabloids. Frank gives her Sweetie in the end of the book.

When Frank and Susan leave Rodrick, Manny and Greg at Grandpa's, Greg mentions whenever Frank and Susan go away they usually leave them with Gramma. But Gramma was on cruise which is why they got stuck with Grandpa.

Greg wishes that he could switch spots with Sweetie during the blizzard, because Gramma overfeeds him. When they went over to her house, she had given the guest room to Sweetie and forces Greg and Rodrick to sleep together on her pull-out couch.

Gramma is seen in a few of the flashbacks Greg has from when he was a baby. It's revealed that when Greg was being born, Gramma was watching Rodrick. When they returned from the hospital, Greg found out he wasn't an only child. Later on in the book, she is seen in a picture.

Easter was spent at her house (last year and this year) and Greg talks about how it is boring but used to be fun when Meemaw used to hide eggs. She was also seen searching for Meemaw's ring. At one point, Susan mentions that Gramma has ESP. Later, Greg tossed the Magic 8 Ball near her fence which incidentally helped him find Meemaw's ring.

She was mentioned when Greg was young, Susan said "C-A-T, CAT" when Gregory got scratched by Gramma's cat

Greg talks about how he doesn't have any mittens to keep his hands warm because Gramma forgot to knit the thumbs while knitting and watching TV. And how she and her friends and her dog Sweetie were wearing bathing suits having a good time when Susan showed the video to Gregory

After the events of Wrecking Ball which left the Heffleys homeless, the family had to stay at Gramma's until they could pay off their house. Gramma didn't like having them as visitors.

You can visit Gramma's house, which is by the laundromat. She'll offer to drive around and look for Manny if you shovel her driveway. Once you do, she says that she'll look for Manny once she's done playing bingo at Leisure Towers. You can meet her at the bingo hall and she'll let you play bingo as a guest.

Gramma likes to play Bingo at Church, but is not as serious as some of the ladies. She also reads tabloids, which leads to problems, as Susan claims that tabloids are full of lies. However, Gramma seems to believe the tabloids, such as when she would not answer her phone because she read that it erases the memory of the elderly people, however, we do not know for sure that she read that from a tabloid (although that is a likely possibility). She claimed that she read it in the New York Times, but that is likely untrue, so she either lied or forgot where she read it. It is still unknown where she read it.

Susan also thinks she has extrasensory perception (meaning she is or might have been a psychic or influenced by one). However, if she is psychic, she does not use her powers to their full potential. Gramma is also a competent chef, being able to make cookies, hot chocolate and dog food. She also likes animals, but does not know how to look after a dog properly, as evidenced when she feeds Sweetie extremely excessively, doesn't do anything about it when he becomes lethargic, and dresses him up.

In the Deep End, it's implied that Gramma doesn't like it when other people stay at her house, even if they are members of her family. Regardless, she means well to her family but sometimes gets easily distracted when making gifts for them, as shown in the Meltdown, she knitted mittens for Greg but forgot to add thumbs since she was watching TV.

Gramma tends to spoil Sweetie rotten. She feeds him to the point where Greg describes him as "a tick that's about to pop," and even gave him the entire guest room. It comes to the point where she refuses to give the guest room to the Heffleys when they come over, even when they are homeless, and forces them to sleep in a less comfortable place, her basement.

Gramma is an elderly lady with white curly hair covering her ears. Her facial features are very similar appearances to those of her daughter Susan (including the shape of her nose). She mainly appears wearing normal clothes and a skirt throughout the series. 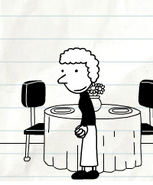 Gramma is feeding the leftover to Sweetie, as he was overfed.

Gramma knitting the mitten for Greg as she was watching TV that she forgot to add thumbs for the mitten.

Gramma at home cranking up the heat with Greg and Rodrick while they are having refreshments and both perspiring from the heat.