Flat Stanley is a character from a real-life novel. He gets crushed with a bulletin board at night, which makes him as thin as paper hence able to fold himself, mail himself to his gramma and have his brother fly him as a kite. In the second grade Greg and his class each got a paper cut-out of him, which they had to color and send to a relative who lives far away and they have to take a photo of him in front of something. In The Long Haul, Susan takes a cutout with herself to take photos of it, but Greg doesn't like them. Susan had mailed it to her cousin Stacey in Seattle, who put him in a storage of newspapers and magazines, because she is always hoarding stuff like newspapers and magazines. After that, the cutout never returned to Greg.

The story gave Greg a "deathly fear" of bulletin boards. Not long after (presumably second grade) Rowley asks Greg if he wants to sleep in his bed, but the bulletin board above made him forfeit. Greg also imagines himself being flat and Rodrick putting him in a paper shredder, saying that he bets that if Flat Stanley had a brother like Rodrick, he wouldn't survive a whole day. When Frank tries to talk with a cilent on his phone, the air vent ends up not being able to close, and the air rushing in from outside dislodged Flat Stanley, and he went flying.

Flat Stanley is mentioned in The Meltdown when Greg says he wants a TV on his ceiling, but he hopes the person who installs it knows what they're doing, because he doesn't want to become the next Flat Stanley. 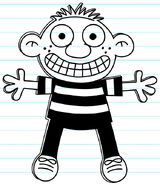 Add a photo to this gallery
Retrieved from "https://diary-of-a-wimpy-kid.fandom.com/wiki/Flat_Stanley?oldid=134019"
Community content is available under CC-BY-SA unless otherwise noted.