Diary of a Wimpy Kid Wiki
Register
Don't have an account?
Sign In
Advertisement
in: Films, Upcoming Stuff, 2021,
and 4 more

[3]Diary of a Wimpy Kid is an upcoming animated film based on the book series of the same name. [4] It will be released on Disney+ on December 3rd, 2021. The film was originally intended to be a TV series, but Jeff Kinney confirmed that it would be an animated film[5]. In November 2018, Kinney confirmed to have written two episodes, later stating in an interview with ComicsBeat that it would arrive “within the next couple of years”.  [6]

In May 2020, in an interview with the Boston Globe, Kinney revealed the origins of the project, saying “This project started off years ago with the idea that we’d create a holiday special for Fox. But the entertainment world has completely transformed since then, and a streaming platform seems ideal for Diary of a Wimpy Kid thus an upcoming animated Disney+ original series based on the book series of the same name.” [7]

On October 19, 2021, the movie's trailer came out. On that same day, it was announced that Vancouver-based animation studio Bardel Entertainment would be providing animation services for the movie.

The first known scene, likely inspired by the snowball incident in the first book.

Greg rolls down the snowball 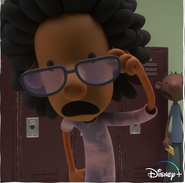