It's been two weeks since Greg Heffley had a fight with his ex-best friend, Rowley Jefferson. Now Greg is in the market for a new best friend, and his only two options are Christopher Brownfield and Tyson Sanders. However, Christopher is more a summer friend than a school friend and is good at attracting mosquitoes, and Tyson plays video games, the same as Greg, but pulls his pants all the way when going to the bathroom. Then, he finds out that Rowley's parents found a replacement best friend: a hired role-model from a company called "Cool Brian", and Rowley himself does not even know he is playing with a random guy his parents made a contract with.

On the first day of school, students are given textbooks that are hand-me-downs, since the school can't afford to buy new ones. Greg attempts to score popularity points at school with a textbook that was previously owned by Jordan Jury, the most popular student in the grade above Greg's. He also posts edited photos on the Internet in an attempt to try and convince others that he has a fun life (which he doesn't, or at least not above average.), because he thinks that everybody was having a greater time than him. However, he got caught by Susan when he was in the middle of recording a New Year's Eve party. She mentions how one time Rodrick's posts were making people not hire him, so he makes a post of him reading with glasses.

In Health class, everyone in Greg's grade has to take Advanced Health, which covers what Greg calls some "top-secret" stuff. After a few days, Nurse Powell splits the girls and boys up for the day. She puts up a video for the boys to watch that talks about puberty, which Greg explains that it was possibly the same video Frank watched at Greg's age. The video turns out to be very gross and disgusting to Greg and especially Rowley. As a result, Greg theorizes that Rowley decides to stop playing with the "Cool Brian" guy, and avoids the older kids at school, because he is afraid that he is going to "catch puberty".

Greg attempts to audition for a local ice cream advertisement for an ice cream company called "Peachy Breeze." Greg fails his audition, partly because Susan sees him as too old and partly because he dropped the ice cream when attempting to jump up and click his heels when saying the slogan. Greg then explains how he is discriminated against because of his age by his own family, stating he was the center of attention when he was younger and is now ignored more often due to Manny, his younger brother. Greg is then informed that his Uncle Gary will be married for the 4th time. Greg explains about "the Talk" given by his great-grandmother Gammie, a polite, but sly and clever old woman. The last person that had ever received it was Rodrick, meaning that during the time where the wedding happens, Greg will have "The Talk".

Susan Heffley, Greg's mother, announces that she will be going back to college for a few months in order to stimulate her mind. As a result, the Heffley men must take care of themselves, and most stability falls apart. Food is often ruined or not cooked properly, so they need to eat out. Frank Heffley, Greg's father, sprains his ankle chasing after Rodrick for accidentally spitting gum onto him on one night when they try to go out to eat. As Susan usually does the chores around the house, Greg is left with little clean clothes to wear. Greg also complains that he must take more time to do his homework, since Susan often helps in the way of giving him all the answers indirectly and since his father, Frank Heffley, makes him do the work on his own and is helping very little.

Greg was also given the responsibility of waking himself up. He tries a wind-up clock, a better alarm clock than his older one, which didn't work. The constant ticking noise from the clock reminds him of a bomb, causing him to be on edge all night and therefore not get enough sleep. As a result, while trying to sleep leaning on a wall, Greg accidentally sets off the fire alarm at school in his sleep-deprived state, but manages not to get caught. After the alarm, a rumor passes throughout the school which says that the fire alarm squirts out some invisible liquid and the teachers can see the liquid. Then, a new rumor spreads that it was actually the teachers who started the rumor and it's all a trick so that security will know who was touching the fire alarm if you wash your hands. As a result, nobody goes to the bathroom. Eventually, the school is dismissed early, because no one is washing their hands and they are in the middle of the flu season.

Greg faces more misfortunes, such as facing a serious, ill-tempered, paranoid dentist instead of going to a fun dentist center where Greg has a crush on one of the hygienists there; failing a high-grade Health class assignment, where he must take care of an egg like it is a baby because Susan cooked it; and dealing with an extremely lazy maid whom Susan hired to clean the house who refuses to do Greg's laundry by stalling with questions such as "do I separate the lights and darks?", eats some of the Heffleys' junk food, hogs the TV, and takes naps in Greg's bed.

At school, a "Lock-In" is organized where boys and girls Greg's age have a supervised slumber party in the school auditorium. It turns out to be a disaster, in which there are nearly little to no girls, excess amounts of chaperones, all technology is confiscated, there are party games which bore Greg, and an incident occurs where the chaperones think one of Greg's team members of a game photographed their posterior until Tyson Sanders tells Mr. Tanner that the picture was actually of his elbow. The boys fart in their sleeping bags and Mr. Tanner tells them they need to go behind the curtain if they have to "pass gas", so they start to make fart noises behind the curtain. When David Rosenburg brings a tuba from the music room, the heater turns off and the air conditioner goes on. Pretty soon, it is so cold in the auditorium that the boys pack themselves together "like sardines" to preserve body heat. At about one o'clock in the morning, the boys notice a guy from the towing company towing Mr. Palmero's car, parked in a handicapped spot. They try to get his attention to break them out of the school, but he never hears them. At three, there is a pounding sound on the door that wakes all the kids up. There is a bunch of angry parents standing outside. Apparently, the parents were trying to call their kids, but due to Mr. Tanner taking the cell phones, they got into a panic because, of course, no one replied. The parents who came to the school take their kids home with them, leaving Greg and Rowley, the only two kids without cell phones.

Greg gets sick with an unknown illness, which he suspects is because the experience at the lock-in was "too much for [his] body". Susan tells Greg she is going to the library to study, which disappoints Greg since the only positive thing he sees about sickness is being fussed over. At noon, he sees a lot of cars parked on their lawn in his window, and he could hear a lot of talking and the TV downstairs from his room. When Susan decides to come home from the library early to take care of Greg, she finds out about the maid's laziness, as well as finding her watching with other maids. After this, she fires Isabella for good.

Greg then recovers and goes back to school, where Rowley arrives with a large pimple on his forehead. He explains that his mother told him he is "becoming a man". This makes Greg wonder about when he'll start puberty, but after talking it over with his parents, they both reveal that they were actually both late bloomers, so he probably won't be starting puberty for another few years or so if he's anything like them.

The next day, Greg and Rowley are both invited to one of Jordan Jury's notoriously wild parties. Greg thought that maybe it was his book and/or Rowley's pimple that made Jordan invite them, but it was pretty clear that because they were best friends was why they were invited together. Greg then explains about the wild parties Jordan Jury holds, which are legendary and have a lot of girls in there.

Unfortunately for Greg, Susan doesn't let him go, because the party takes place on the same weekend as his Uncle Gary's wedding. Greg tries to promise that he will go to Uncle Gary's 5th wedding, but Susan tells him that he is playing a major part in it and he can't let Uncle Gary down. Greg also tries to call Rowley and tell him that he can't go since Greg has a wedding to go to. Rowley angrily replies that he doesn't care and he is going since he is almost a grown-up now.

Greg is humiliated and bored at the wedding for many reasons. Mostly, Greg thought he was a groomsman at the wedding party and would have a good time when Susan had explained to Gammie that they are picking up Greg's tuxedo. However, during the day of the wedding, Greg is actually the Assistant Flower Boy, and he is actually wearing the same white tuxedo as Manny, much to Greg's dismay because he finds the job embarrassing and not as interesting as being a groomsman. After the wedding, Greg receives "The Talk" from Gammie, which he has been nervous about. Gammie explains to Greg the stress and horrors of becoming and being an adult and growing old both physically (such as pimples and, at old age, wrinkles) and mentally, which causes Greg to decide to enjoy his late childhood for now.

Once Greg gets back to school, he realizes that while the wedding may not have gone well, it's ultimately a good thing that he didn't go to Jordan's party—while the party itself was apparently pretty crazy, it turns out that the only reason that Jordan invited kids from Greg and Rowley's grade to the party was to basically use them as servants. Greg also discovers that Scotty Douglas won the Peachy Breeze competition, although he couldn't get the slogan right.

At this point, Susan stops going to college for now and returns to the family, much to Greg's delight. Also, Greg and Rowley ultimately become friends again after Greg decides to make the first move in patching things up instead of just waiting for Rowley to come to him. Greg says that he forgot what he fought about with rowley. The book ends with him explaining that Rowley has grown a whole inch and a half since the summer, and he explains they can take it one step at a time and can be friends, at least until high school because Rowley can be a good person he can have at his side. 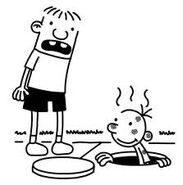 A sketch of the original cover

The event guide for The Ugly Truth. 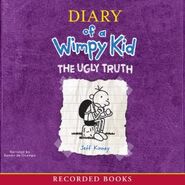 How to play: Three Truths and a Lie

Romanian cover.
Add a photo to this gallery 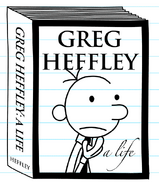 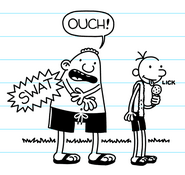 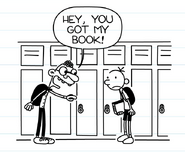 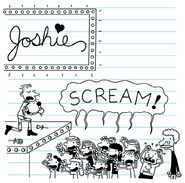 Joshie performing a song right in front of girls 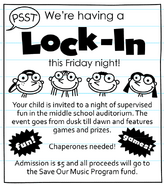 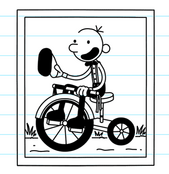 George Fleer chasing people around with his outie 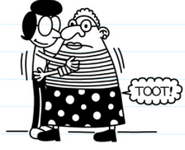 Here is the video for The Ugly Truth.

Retrieved from "https://diary-of-a-wimpy-kid.fandom.com/wiki/Diary_of_a_Wimpy_Kid:_The_Ugly_Truth?oldid=160126"
Community content is available under CC-BY-SA unless otherwise noted.