The pressure’s really piling up on Greg Heffley. His mom thinks video games are turning his brain to mush, so she wants her son to put down the controller and explore his “creative side.”

As if that’s not scary enough, Halloween is just around the corner and the frights are coming at Greg from every angle.

When he discovers a bag of gummy worms, it sparks an idea. Can Greg get his mom off his back by making a movie...and will he become rich and famous in the process? Or will doubling down on this plan just double Greg’s troubles?

At the beginning of the book, protagonist Greg Heffley can be seen talking about how he thinks his life is a reality TV show, and how he thinks Rodrick, Manny, and all the other people in his life are just actors and robots, similar to the plot of The Truman Show. He later explains how he thinks that Manny was brought in as a new star to replace him. Greg thought Manny was a machine being controlled by a person in the background and then brings the subject that his family is robots and Greg is the only human. He later sprays Frank with a hose to prove is he is a robot, leading Greg to be grounded for 7 days. Later, Greg says his Nana is watching him from heaven, and he's got a lot of issues with it.

Greg's school is now having a book fair, and Susan gave Greg $20, then buys useless toys like two pencils with hairy google eyes, a poster of a cat saying something sarcastic, a panda-shaped eraser, a glow-in-the-dark calculator, a pen that is able to write\draw while in water, and a yo-yo that are not books. However, Susan is not happy with Greg's selections and made Greg promise to trade them for books. Greg then talks about in the 3rd grade, Greg wrote a poem, and sent it to one of the poetry groups, but turns out that everyone can have the poems in the book. Susan also tried to get Greg into the Talented & Gifted program, but to prove he can join, he had to take a test, in that case, he failed, causing Susan to get mad at the school. Later on, there was a secret group called "Champs", that is used for kids that are having hard times saying "R" words, but Greg was not learning, so then Susan hired a tutor, but Greg can no longer be in the group when he said a sentence with words starting with "R". He also says that when Manny played soccer, his team never got a goal, due to Tucker, the goalie spending the rest of soccer stuffing grass in his belly button. However, he got a trophy. Susan is also disappointed when Greg gets a series of books called "Spinticklers", which has spooky stories.

Greg then discusses how the geese are in town and the deals of having a walking pet pig. Then he talks about the school's Balloon Brigade, which is a school contest to see how far a student's balloon can travel, and how the prize is a giant bag of candy corn. The Cheese Touch is also discussed, and how other students keep trying to bring it back in a different form such as a Roast Beef Touch; however, the kids unsuccessfully try to make it work.

Greg later discusses how the Spinetickler's books give him nightmares and how he regrets reading them, like the dream he got a tail and people were jealous of him. He later says that he got his balloon back and that the kid who found his balloon, Maddox Selsam, came over for a play-date. It's later revealed that Maddox hasn't played video games or watched TV, and goes crazy when Greg pulls up a computer game. After Maddox leaves, Greg realizes that he forgot to get the balloon. Vice Principal Roy refuses to give Greg the candy corn unless he brings his balloon to school. He asks Susan for a play-date with Maddox, to which she and Mrs. Selsam leave Greg and Maddox behind while they go into town and have coffee. Greg is thoroughly disappointed by Maddox's house, as it is very old fashioned and does not have any electronics or any television. It is revealed Maddox has a Lego City in his room but only lets Greg use the leftovers. Greg accidentally gets a brick stuck in his arm, which Maddox accuses Greg of stealing, leading to Greg being kicked out. Susan is disappointed at Greg, as he viewed Maddox as an antisocial nerd instead of a good role model.

Susan, now going back to college full-time, has a chore bag where Greg and Rodrick pick chores to do. After finishing his chores, Greg goes to eat the giant candy corn that he won but finds that the pig has eaten it. Greg told Rodrick to wake up and Rodrick wasn't too happy Greg woke him up, but one look at the pig, he told Greg to get in the van. The pig threw up in the van, and Greg couldn't take it anymore, so Greg threw up, too. After the pig throws up multiple puddles of candy corn, Susan has a talk with Greg about his "pattern of deception" and punishes him by making him take three chores out of the chore bag each night. He then talks about how his brain works and how he has lain to so many times over the years. Susan keeps putting the pressure on Greg to do something new other than video games while also introducing him to college. Greg and his friend Rowley later join the school band in order to get invited to Mariana Mendoza's Halloween party. He practices the French Horn but hates it and wants to quit, angering Frank who tells Greg that he can't because that was an expensive instrument and he has to honor his commitment to the instrument. Greg finds videos of a high school girl practicing the french horn, which makes Greg glad. However, Greg finds out Mariana didn't invite the entire school band, only the woodwind section. Greg gets in the party by making a "Two-Headed Monster" costume. At the party When the party is about to hit the next level, Rowley has to use the bathroom. Susan then decides for them to leave early.

Greg is later harassed at school about it for leaving early. At the Fall Band Concert, Greg gets stuck in the music room because Jake McGough gave him a flat tire. Rowley notices him in there when he came in the room, he ended up getting locked in too. Causing a huge dilemma. Greg temps to open the door, but his pants ripped. Greg tries Mrs. Graziano's black binder, which worked, but it was so stiff that he couldn't sit down. He finds a black marker and gets Rowley to color the part of his underwear which is showing. Frank then comes into the room and caught them. Frank thinks they were goofing off and punishes Greg by taking away TV and video games for 2 weeks. Greg and Rowley later find a pack of gummy worms and Greg gets the idea for a horror movie.

The plot would be about a man who goes to take a shower, only to end up being eaten alive by worms. He and Rowley, while filming it with Susan and Frank's camera, Greg tries to get more worms from the laundry room to get more, but the pig is eating them. Greg tries to figure out what to do but hears Rowley screaming to the geese. Greg remembers about Rodrick having a wolf mask he wore one Halloween, and he and Rowley go to the basement room to get it while trying to, the witch goes off and one of the shelves comes falling down on them. Rowley runs out of the house with barely any clothes just as Frank gets home, and a news crew captures the whole moment. Frank gets mad at Greg for making the mess, and Susan later gets mad, because Greg and Rowley filmed right over a tape of Manny's first steps. As a result, Greg has to clean up the mess and do extra chores for a while. Rowley, on the other hand, drinks in his newfound fame and skips school to attend on-TV interviews with talk shows, much to Greg's dismay that Rowley doesn't mention Greg at all. 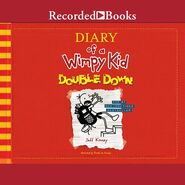 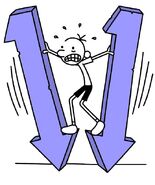 Romanian cover.
Add a photo to this gallery 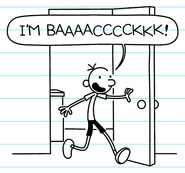 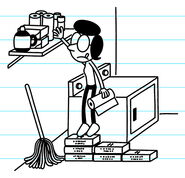 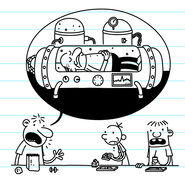 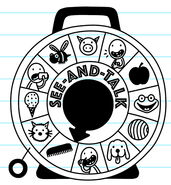 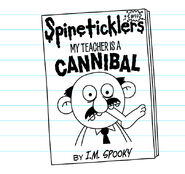 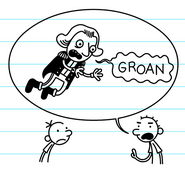 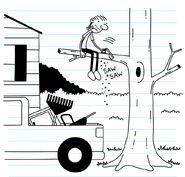 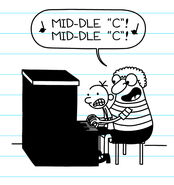 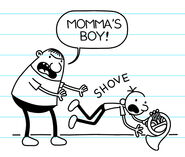 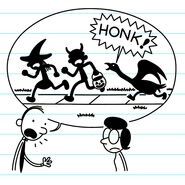 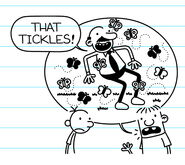 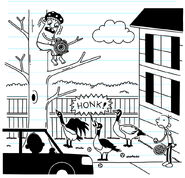 **NEW BOOK!** Diary of a Wimpy Kid- Double Down Video
Add a photo to this gallery

Retrieved from "https://diary-of-a-wimpy-kid.fandom.com/wiki/Diary_of_a_Wimpy_Kid:_Double_Down?oldid=160190"
Community content is available under CC-BY-SA unless otherwise noted.