Worrying about the holidays, Greg writes in his journal that he has to change his behavior to not get bad presents for Christmas. He then complains about a toy Susan brought out, Santa's Scout. To Greg, the toy doesn't let him repeat any of his usual antics to find out what his presents are. The next day, while putting up the Christmas tree, Manny throws a huge tantrum when he finds out that they were decorating without him. Greg then recalls how before Thanksgiving Break, his school had a contest to create posters in order to get rid of bullying. This makes Greg remember how he and Rowley were chased with a stick by Nasty Pants, but only to find out he's just five to Frank's disappointment. Greg can't help but notice how the adults at his school had trouble paying for insurance for the playground equipment after noting that the school took away all of it and the kids wear bicycle helmets to Manny's peewee soccer game. Greg decides to create his Christmas wish list as to not repeat what happened a few years ago. Since he didn't write a wish list, Susan got him a doll named Alfrendo while Susan was pregnant. He soon grew to love the doll, but misplaced it so he developed a fear that the doll will return to extract his revenge. Missing the feeling he had taken care of Alfrendo, Greg turns to Net Kritterz to fill the hole. However, he grows too addicted so Susan makes him invite Rowley over. Spotting the two playing video games, Susan tells them to do something else and has them played Wacky Sentences, but they get in a fight over the spelling of volleyball. They then play Hide-and-Seek but Greg finds Rowley easily so he decides to spend time to himself by committing a dare. Rowley backs out, and the rest of the night is argument free. Rowley accompanies the Heffleys to church, as Rowley's family doesn't go to church so he doesn't know the rules, he thought that peace be with you was actually the vegetable "Peas" be with you and gave a kiss to a woman instead of hand-shaking, Greg and Susan was glad when they dropped him back.

Greg tries to ask Susan to loan him money, but she won't give him any. She tells him he could shovel his neighbors' driveways the next day. Greg finds a customer but turns his driveway into ice after melting the snow with water and spends his $20 on rock salt to melt his driveway. Frank reminds Greg about using "poor judgment." The same thing he said about an incident with a Student of the Week bumper sticker. Instead of going to church, the Heffleys head to the Giving Tree where Greg places a note requesting cash.

The school starts telling students to eat healthier as a way to improve their Phys Ed ranking. Greg asks Mr. Underwood if he can finish his sit-ups as homework, and he agrees as long as he gets proof. Greg paints fake abs with mascara on his chest, and many other boys follow suit. However, their ploy is ruined when the mascara runs because of their sweat. Susan tells Greg that he has to start buying his gifts with his own money, which he usually does at the Holiday Bazaar. Greg decides to sell his signed graphic novel, but it is revealed to be a fake signature and realizes his mother must've signed it because she got tired of waiting. Greg forgets that he had to get a gift for his holiday buddy but Susan manages to get him at the last minute.

At the store, Greg spots Drummies! and decides to create his own Holiday Bazaar. He and Rowley hang posters at the school, but it starts to rain and the color is attached to the wall. Someone spots the two, but they take off. The school starts to spread rumors and investigate who was responsible. Rowley turns Greg and himself in, but only states Greg's name. Greg decides to take one for the team and scrubs the dye off. The police leave a note stating they'll be back to Greg's horror. However, the family, except Frank, who had to stay in a hotel, due to the weather, are trapped inside the house.

Manny manages to hack Greg's Net Kritterz account and spends all of his tokens and points in that game. He even somehow figured out how to change the password. To keep the boys entertained, Susan brings out some board games to keep them occupied. Greg plays a magic trick on Manny that there's a hole in the table. Manny tries that with Susan's glasses and breaks them. Susan then tells Greg has to take care of Manny and to feed him. Manny throws huge tantrums on how Greg is not serving the food the way he wants, but Susan backs Manny up much to Greg's dismay. The next morning, Greg heads into the basement and finds out that it was a foot underwater, ruining most of their stuff. The four spend the day clearing the water out and Susan has Rodrick sleep in Greg's room for the time being. Greg heads back to the basement to salvage stuff and is reunited with Alfredo, which Greg figures Frank hid. Greg notices the food was starting to dwindle down and decides to survive on a jawbreaker. The electricity cuts out and then powers off.

Manny hides in his room while the three huddles together to keep warm. Greg misplaces Alfrendo again and is forced to shower. Following that, Rowley asks Greg if they want to build a snowman but Greg asks how his family is living without power. Rowley tells Greg that the electricity is back and his house is the only one in the street without it. Greg then gets curious and goes and checks the fuse box, he finds that Manny fused all lights except for his room's. Greg reports to Susan, they investigate Manny's room and find a heater, lights, toys and food. Susan questions him, but Manny starts bawling it's because he doesn't know how to tie his shoes. The snowplow arrives and clears the snow and Frank comes home with food. Susan has Greg head to the police station and delivers their gift. Greg hides his face, thinking he's wanted and delivers the gift. He remembers he had asked for money and shovels snow off the driveway but finds nothing.

He returns home when the police enter, but instead of asking for Greg, they ask for last-minute gifts for the Toy Drive. Greg tries to give them Alfrendo, but the cops got freaked out by looking at Alfrendo and said that they won't accept used toys and quickly ran away. Greg wakes up Christmas morning with no presents downstairs, but Susan says they did get gifts and they were wrapped in trash bags since the blizzard messed up Santa's schedule. Greg got his first signed the signed Tower of Druids book for real and by Kenny Centazzo. Susan asked him to write: To my biggest fan, Greg. But Kenny did not hear Greg's name carefully, so it wrote: To my biggest fan, Craig. That made Greg wish that he will find a rich man and sell it to him that was named: Craig. Rodrick got a drum and some drumsticks. Manny got a lot of toys, like every Christmas. Susan got Manny sneakers. Greg, Rodrick, and Manny got V-neck sweaters, then they had to go to church, Greg wore his pajamas also inside the sweater and when he came back he was so sweaty that he had to take off his shoes and get the water out in the sink. Returning from church, Greg sees the newspaper which thinks that he unselfishly cleared the snow so homeless people can get food from the soup kitchen. He said the newspaper didn't get the story right, but he won't complain, the article has inspired him to put out a new version of the Neighborhood Tattler and Greg says he bets they can sell a ton of copies.

"I’m very excited to be writing the sixth Diary of a Wimpy Kid book, which features the Heffley family being snowed in,” says author Jeff Kinney. “Having just experienced an epic winter in New England, I’ve had plenty to draw about."[1] 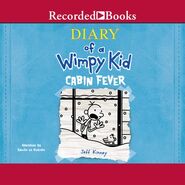 A broken toy car, that the kids play with during recess

A black market for LEGO bricks in Greg's school after toys were banned.

Here is the video for Cabin Fever.

Retrieved from "https://diary-of-a-wimpy-kid.fandom.com/wiki/Diary_of_a_Wimpy_Kid:_Cabin_Fever?oldid=140174"
Community content is available under CC-BY-SA unless otherwise noted.