Bryce Anderson is a student who is the most popular kid in Greg Heffley's grade. He is famous for knowing that he has a cute butt from girls who admire him. Greg shows that in elementary school, he didn't like girls, for he said, "Girls are stinky-poos!". Greg tries to make him look like an idiot when he hears him talking to any girls. Greg used to defend the girls saying: "I don't think girls are stinky-poos!".

Greg talks about how Bryce Anderson is the most popular kid in his grade and most of the girls have a crush on him, even though he didn't like girls in elementary school.

Bryce is shown talking to Holly Hills while Greg is saying "I'm an idiot" to throw his voice to Bryce.

Bryce appears fooling his friends about a high-pitched noise. It is mentioned by Greg that he does not need a best friend, because he has goons who follow him.

Bryce appears during Greg's seventh-grade summer (during the events of Dog Days), where he owned a restaurant created for the neighborhood parents. After the success of the restaurant, he earned over 300 dollars, which he split for his goons (one of whom bought a BB gun to prank Greg).

Bryce gets Candy Grams from five different girls when the first few of the Candy grams arrive.

Many girls at Greg's school like him and most boys supposedly worship him, of being loved a lot by girls like Holly Hills and Shelly. Many other girls have crushes on him; Ruby Bird probably did not due to being more interested in Fregley.

Bryce appears with his other goon going around the cafeteria with Jeffrey Laffley, and he won the Best Hair award. 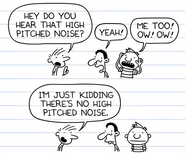 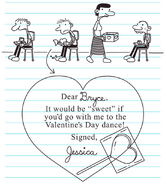 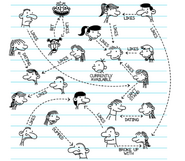