“It's really hard. First of all, there's no home-cooked meals like this. On the road, it's all burgers and fries and pizza. Then you got to deal with the fans, especially the girls. No, it's definitely not for everyone. But, if you like rocking deep into the night and partying hard all day then it might be the life for you.”
―Bill about the band life

Bill Walter is a man who is the lead guitarist of Rodrick Heffley's band, Löded Diper. He is played by Fran Kranz in the book's movie adaptation.

In high school, Bill was voted "Most Likely To Be a Rock Star", which was the reason Rodrick invited him to be in his band. He does not have a job and still lives with his parents, despite being thirty-five years old during the events of Rodrick Rules.

Greg Heffley thinks that his dad's worst fear is that Rodrick will see him as some kind of role model and want to follow in his footsteps, so whenever he sees Bill, it puts him in a bad mood for the rest of the day. Frank does not approve of Bill and Greg is impartial.

In the second film, he was working as a DJ at the Rocket Rollers Roller Rink, and at Plainview's Most Talented, he gets kicked out of the band by Rodrick after performing "Explöded Diper."

Bill Walter was born on December 28, 1972 in Plainview. He attended Bishop Garrigan High School in September, 1988. During that time, he was voted "Most Likely To Be A Rock Star" but that did not work out for Bill because as soon as he graduated in June, 1991.

In Summer of 2003, while Rodrick and his band who were camping overnight for concert tickets a young Bill Walter meet Rodrick Heffley (who was 13 years old at the time) and they became friends due to him being voted "Most Likely To Be A Rock Star" back in high school.

While on the way to the mall one Saturday, Greg and Frank Heffley run into Bill, who is coming to their house for band practice. He greets Frank. When Rodrick throws a party at his house, he calls and invites Bill, who attends the party.

Greg also says that the year before, Rodrick's science fair project was "Does Watching Violent Movies Make People Think Violent Thoughts?", which was just excuse for Rodrick, Bill, and his other friends to watch horror movies on school nights.

Bill goes to the Winter Talent Show in the Löded Diper van with Frank, as Rodrick and Susan Heffley had left earlier in the family minivan. He takes the stage with the rest of the band when it is their turn to play. During the performance, Bill flicks his tongue up and down like a rock star, leading Susan, who is recording them, to express her dislike of the act. Afterward, Bill goes to Rodrick's house to watch Susan's videotape of their performance and returns the following night to watch the school's video of it.

Greg mentions that Bill met Rodrick when he asked him for a potato chip as he was camping overnight for concert tickets.

Bill has a cameo in the end credits.

He is the main antagonist of the movie. His character is notably different. He first appears near Rodrick at the Rocket Rollers Roller Rink as a DJ. Later, he joins the band and invites himself to a dinner at the Heffleys' house. He tells Rodrick and Greg that being a major rock star is a little tough, but then tells them that the life of a rock star is awesome by making note of the female fans and parties. When Rodrick is grounded from playing at the talent show, Rodrick says that he just got Bill in, and Frank Heffley says "That doesn't really improve your case. Bill is kind of a jerk." This proved to be true when Bill replaced Rodrick with another drummer and planned to perform without him, despite Rodrick being the one that started the band. During a guitar solo, Rodrick kicks Bill out of the band.

Diary of an Awesome Friendly Kid

Bill is pictured when Rowley talks about Löded Diper.

Bill Walter as a teenager. 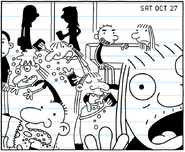 A photo of Rodrick's party with Bill in the foreground.

Bill and the rest of Löded Diper performing at the Winter Talent Show.

Bill in the movies.

Rowley Jefferson's depiction of Bill.
Add a photo to this gallery

Retrieved from "https://diary-of-a-wimpy-kid.fandom.com/wiki/Bill_Walter?oldid=161357"
Community content is available under CC-BY-SA unless otherwise noted.