The Battle Of Surrey Street

Snowplow goes through and ends the battle. There was no clear victory.

Battle of Surrey Street was a period of conflicts, spanning two days, that happened between the Lower and Upper Surrey Street.

Greg Heffley and Rowley Jefferson built an igloo, but it had no door, so Greg burst out to grab a gulp of air. It was an easy target and many kids started to throw snowballs at him. He ran to his mother, Susan Heffley, and he asked her to shout at them. She said no, as it was a conflict he needed to resolve. Frank Heffley took on a different take and said he needs to create a clan as they just declared war.

After studying medieval tactics for an entire night, Greg bought 24 snowballs and 1 snowball launcher from Mitchell Pickett, who had a thriving ready-made snowball business.

Coming back to the empty lot, on which the igloo was located, he saw many other clans, which took his idea as inspiration. Some had cool flags while others had really bad ones. Some even copied his flag.

Greg found one which was empty which was on a tall snow mound, from which he would have the high ground. But when he claimed it for himself, it actually had someone in it: Baby Gibson. Together they fought-off other attackers. However, the Pre-School Group took over after they tunneled through the base, and the Marlee Sisters attacked Greg and Rowley shortly after. Greg, Rowley, and Gibson had to flee onto the battlefield. It was then total anarchy.

Everyone stopped, however, when an Upper Surrey Street Kid, Joe O'Rourke, was hit in the face by an ice-ball which knocked out a few of his front teeth. A clan meeting was held to decide on banned items, like yellow-snow and ice-balls. Also on banned behavior like putting ice on someone's hat and then making them wear it.

They had the decision to build a wall, to keep out the Lower Surrey Street kids. It was a double-wall to make sure it was strong and sturdy, and it had icicles that protruded out of the front. There were also snowmen, made by the homeschooled kids, that made it seem there were more kids than there actually was.

The Upper kids released a volley of snowballs, which had little effect on the armored Lower kids, which were in a defensive position, with their shields held high. The Lower Surrey Street Kids retaliated with Sloppy Specials, which meant Mitchell was selling ammunition to both sides. Shortly after, the armed kids gave way for running ladder-troops, which put the ladders at the base of the wall and began climbing.

Rowley quickly arrived at the scene with Hot Cocoa, which a few kids poured onto the ladder-troops, Rowley forgot to add water and the simple dust did little except annoy them. Luckily, Speed Bump and Latricia Hooks come with trash cans full of slush and dumped it on them, which made the ladder-troops retreat.

"It began to get a little sunny and I began to sweat. I now wish I wore my Thermal Underwear"

Some kids got so dehydrated that they began sucking the precious snowball ammunition, which the other kids didn't notice until they were half-way through them. Then Anthony Denard guarded them after that. Three hours, with nothing happening, passed. The Lower Street Kids began laying out chairs and taking cables and food outside, from there they would set up televisions and snacks. It was getting dark and many kids wanted to go home, which was understandable as it was dinner-time at that point.

Jacob Hoff, a respected Upper Surrey Street Kid, said he needed to go to his 6:00 pm Clarinet Lesson or his parents would be mad. He said that he would come back with granola bars and fruit rolls "stuffed into his pockets". They went to extreme measures to get him home safely. Tired, he never came back, and he stood there snacking as he looked out of his bedroom window.

Afterward, The Lower Surrey Street Kids made paper-airplanes and sent them to the wall. Inside, they said, "SURRENDER NOW, AND YOU CAN LEAVE UNHARMED". Many kids started crying, including Baby Gibson, which meant he could read. It was a sad moment for The Upper Surrey Street Kids.

After, a kid came running to the base. It was Trevor Nix. Trevor revealed that he was being held captive, but he escaped. According to him, the Lower Street Kids were making huge amounts of snowballs, and they were making yellow snow and other ghastly things. The Upper Street Kids thanked him, patting him on the back. One of them said he can sled on the hill any time he likes.

Led by Gibson, half of the Upper Street Kids prepared to attack Guzman's Yard in the dark, where the supposed yellow snow was being made. They were sure they saw people making and re-shaping snowballs there, so Gibson gave the signal to throw a barrage of snowballs. But they didn't flinch. They were decoys. The Upper Street Kids tried to get back, but it was too late.

Final stages of the battle

But then, The Mingo Kids arrived, and they were angry. They wanted back the belt buckle that Greg had taken in exchange for his Mitten Puppet, Mr. Morsels, which was left at their camp, which was discovered by Greg earlier.

They joined the fight. At this point, everyone united and turned to face the Mingos. An all-out war broke out, with Greg and Rowley fleeing. They hid in an arched piece of wall, which acted as shelter. They were scared and thought they would be trapped under the snow.

But, the snowplow driver found his way, plowing through snow and kids, not caring at all. At that point, everyone was exhausted so they ended the fight and went home.

It is unclear who won the battle as after the snowplow arrived, everyone went home. Trevor Nix was accepted into Lower Surrey Street due to him helping them against the Upper Surrey Street Kids. Mitchell Picket, who had been playing both sides of the war by supplying snowballs and other things to both Upper and Lower Surrey Street Kids, used his money to buy a snowmobile. Pervis Gentry was never seen again by anyone after he fled the wall. However, the conflicts between all sides still remain. 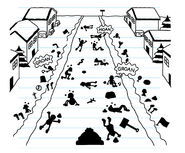 The aftermath of the snowball fight.
Add a photo to this gallery

Retrieved from "https://diary-of-a-wimpy-kid.fandom.com/wiki/Battle_of_Surrey_Street?oldid=165172"
Community content is available under CC-BY-SA unless otherwise noted.